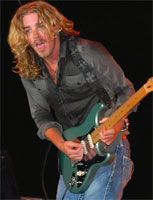 Rock-influenced country singer Bucky Covington first rose to fame in 2006 as a contestant on the televised talent hunt American Idol. Covington was born on November 8th, 1977, in Rockingham, NC, where he grew up along with his twin brother, Rocky Covington. Bucky was bitten by the music bug after seeing blues guitarist Jeff Healey in the movie Road House, saying "I remember...picturing myself on-stage with a pair of sunglasses on, playing guitar and singing, and thinking, that would be cool." Bucky took up guitar not long after he graduated from high school, and before long he and Rocky began playing local clubs, singing and playing guitar with a variety of rock and country bands. Bucky was interested in taking his career to the next level and was considering a move to Nashville when Rocky's wife heard that American Idol was holding auditions in Greensboro, NC, and suggested they should both give it a try. Bucky and Rocky headed to Greensboro, and Bucky made the cut, becoming one of the 24 aspiring stars who flew to Los Angeles to compete on television. Covington rose to eighth place finalist on Idol before he was voted off the show, but that was only the beginning. After appearing on the 2006 "American Idols Live" tour, where he faced arena-sized audiences for the first time, Covington scored a record deal and management contract, and landed on another high-profile package tour when Nashville Star winner Buddy Jewell had to drop out of the "GAC Country Music Christmas Tour" due to a wrist injury and Covington was tapped to take his place. After the tour was completed, Covington went into the studio to cut his self-titled debut album for Lyric Street/Hollywood Records, with Mark Miller, lead singer for Sawyer Brown, as producer. Covington's album was released in April 2007, and he supported the set with extensive touring and plenty of television appearances; joining Bucky on the road was his brother Rocky, who plays drums in his band.