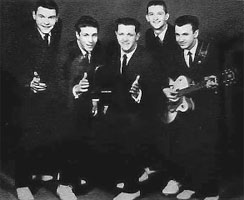 US Rock 'n' Roll group, the Crewnecks were a popular music singing group from 1957 to 1961 composed of five students from Wilkes College in Wilkes-Barre, Pennsylvania: Boyd Hoats, Bruce Miles, Jerry Pauley, Bob Martin, and Larry Chase (Choper).
The Crewnecks released two records under the Rhapsody and Apex (Canada) labels. The first, I'll Never Forget You, was a major hit in eastern Pennsylvania and a number of other areas. The second, Rockin' Zombie, is still popular as a Halloween novelty song.
The group left college in 1959 to go on a promotional tour with their records appearing on national television on the Alan Freed and Rate the Record shows as well as numerous other local TV shows throughout the East. They also appeared on several of Dick Clark's touring shows with such stars as Al Martino, Frankie Avalon, Fabian, Bobby Darin, and others. Their main focus, however, was on their very polished night club act which they performed throughout the Eastern United States and Canada, including in the Catskill Mountains and La Faisan Bleu in Montreal. The group disbanded in 1961 due to military service commitments.