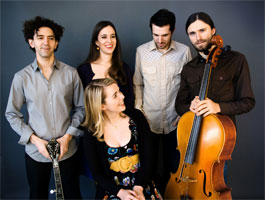 Neo-bluegrass group Crooked Still combines four musicians with distinguished backgrounds and connections. Singer Aoife O'Donovan, a graduate of the New England Conservatory, is also a member of the Wayfaring Strangers. Cellist Rushad Eggleston, the first string student admitted to the Berklee College of Music on a full scholarship, also performs with Fiddlers 4 and Darol Anger's American Fiddle Ensemble while also leading his own Wild Band of Snee. Banjo player Greg Liszt, a Ph.D. candidate in biology at the Massachusetts Institute of Technology, also plays with the Wayfaring Strangers and the Jake Armerding Band. And double bassist Corey DiMario, also a member of the Lissa Schneckenburger Band, has played in prestigious venues around the U.S. with such notable performers as Liz Carroll and McCoy Tyner. The four came together as Crooked Still in September 2001 when O'Donovan was asked to assemble a group for an informal concert at the New England Conservatory. Over the next few years, they developed a following in New England before releasing their debut album, Hop High, in February 2005. Their second release, Shaken by a Low Sound, followed a year later.