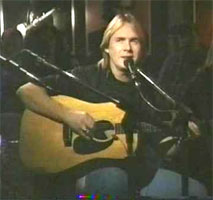 Rob Crosby was a singer/songwriter noted for his folksy, sensitive lyrics. Born Robert Crosby Hoar in Sumpter, South Carolina, he wrote his first song at age nine and had his first band, the Radiations, while still in fifth grade. Inspired by Kris Kristofferson, Bob Dylan, and Paul Simon, Crosby wrote songs and performed with a three-piece combo in high school. While in college, he began playing with the band Savannah in South Carolina nightclubs. He then founded the Rob Crosby Group and toured the Southeast. In 1974, the group broke up and Crosby moved to Nashville with his family; two former bandmembers also moved there, and they and Crosby reteamed to play in local clubs.
A year after getting a job as a staff writer at a small music publishing house, Crosby's 1985 song, "She Told Me Yes," was a Top 30 hit for the group Chance. Soon others, including Lee Greenwood, began recording his songs. When not writing, Crosby earned extra money singing commercial jingles for radio and television. A performance at a songwriter's night hosted by the Nashville Entertainment Association led to a record deal, and in 1991, he released his debut album, Solid Ground, which contained three Top 20 singles, including "Love Will Bring Her Around." He wrote or co-wrote most of the songs on the album and garnered considerable critical acclaim for his sensitive, female-oriented lyrics. His second album, Another Time & Place (1992), did not do as well and Arista dropped him. In 1995, he resurfaced with Starting Now.