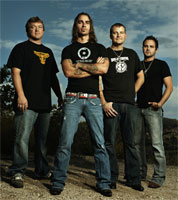 Cross Canadian Ragweed established itself as a relentless touring band throughout the Texas/Oklahoma area and then broadened its reach, nationally releasing several albums of rabble-rousing alt-country. Formed in 1994 in Stillwater, OK, the band took its name from those of its members: frontman and lead guitarist Cody Canada, drummer Randy Ragsdale, rhythm guitarist Grady Cross, and bassist Jeremy Plato. Though the band toured heavily from its inception, establishing a particularly strong fan base in Texas, it didn't release its first album until 2001 when Underground Sounds released Highway 377. Two more releases for the label followed, Live and Loud at the Wormy Dog (2001) and Carney (2002), before the band moved to Smith Music Group for Live and Loud at Billy Bob's Texas (2002). In 2004 the group signed to Universal South and released Soul Gravy, followed by Garage in October of 2005. The band released the double live CD/DVD Back to Tulsa: Live and Loud at Cain's Ballroom in 2006, followed by its sixth studio album, Mission California, in 2007. Happiness and All the Other Things, which was dedicated to Willie Nelson's late stage manager Randall "Poodie" Locke, arrived in 2009.