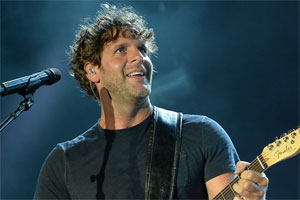 Country singer/songwriter Billy Currington was raised in Rincon, GA. Following high school, he made a couple attempts at relocating to Nashville in the hopes of getting a career in music off the ground, finally landing a job there at a concrete company, while still finding time to play at clubs on the side and work on song demos. When singer Mark Wills put a hold on one of his songs, Currington met and began writing with Wills' producer, Carson Chamberlain, which eventually led to a recording contract with Mercury Records. His first single, "Walk a Little Straighter," was released in 2003, and drew heavily on Currington's experiences with an alcoholic father (the chorus for the song was actually written when Currington was only 12 years old). A debut album, Billy Currington, was released on Mercury Records in 2003. A second album, Doin' Somethin' Right, followed in 2005 on Mercury Nashville. Three years later, Currington delivered the eclectic, R&B-inflected Little Bit of Everything also on Mercury Nashville. In 2010, Currington returned with his tenth-studio effort, Enjoy Yourself, featuring the Troy Jones co-written single, "Pretty Good at Drinkin' Beer." That song went to number one as did "Let Me Down Easy." "Love Done Gone" and "Like My Dog" also reached the country Top 40.
Currington returned to action in 2013, releasing the single "Hey Girl" in March and then delivering the full-length We Are Tonight that September.