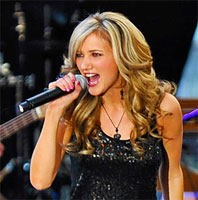 Sarah was born in Des Moines and was raised in small-town Iowa.
In 2002, a year after graduating from high school, Sarah saved $5,000, packed up everything she owned in a horse trailer, and headed for Nashville on the advice of Joe Carter, Tracy Byrd’s manager.
In 2003, Sarah auditioned for an E Network reality show called "The Entertainer," hosted by veteran Vegas showman Wayne Newton. Much to her shock, she was chosen as one of the 10 finalists. She spent the next eight weeks living in the Las Vegas Hilton with the other contestants, singing classic crooner songs on the program, and vying for a million-dollar performing contract. "I didn’t win, but I finished in the top three."
Sarah also did modeling and appeared in a number of country music videos, including "Red High Heels" with Kellie Pickler, "Tequila Makes Her Clothes Fall Off" with Joe Nichols, "Too Much Blood in My Alcohol Level" with David Ball, and "Save A Horse, Ride A Cowboy" with Big & Rich. It was in that video where she played a mannequin and her stiff, non-blinking portrayal was so convincing that "CMT Insider" held an on-air contest to determine whether she was a live person or a dummy. When viewers overwhelmingly voted "mannequin," Sarah went on the show live to prove she was real!