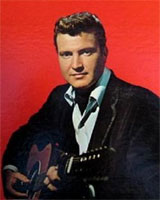 Johnny Darrell was born on July 23, 1940, in Hopewell, AL, but grew up in Marietta, outside of Atlanta. After a stint in the Army, he moved to Nashville to manage a Holiday Inn. It was in this way that he made a few music-business contacts. Darrell came to the attention of United Artists producer Kelso Herston through Bobby Bare, who had heard about Darrell's curious brand of songwriting through one such contact. Darrell signed with UA, and issued his first single, "Green Green Grass of Home," in 1965. A year later, "As Long as the Wind Blows" made it into the Top 30. 1967 saw "Ruby Don't Take Your Love to Town" find the Top Ten. The song, written by Mel Tillis, would later be a hit for Kenny Rogers, establishing a trend of songs Darrell performed later becoming country standards recorded by others. "The Son of Hickory Holler's Tramp" charted in 1968, and Darrell crossed over to the pop charts with "Pen in Hand." The latter song would eventually be a hit for Vicki Carr.
It's unclear how it happened (his early encounters with Bobby Bare?), but by the 1970s Darrell had been lumped in with the outlaw country movement. He joined Hank Snow, Willie Nelson, Nat Stuckey, and Wes Buchanan at Opry's Party Night, an English concert celebrating the birthday of the now-defunct Opry magazine. Darrell charted with a few more singles, including "Dakota the Dancing Bear" and "Orange Blossom Special," but his career continued to wane. Despite a brief comeback, little was heard from him during the 1980s. Darrell passed away in 1997. Three years later, the European indie Raven issued the Darrell retrospective Singin' It Lonesome; the release included all of Darrell's charting singles.