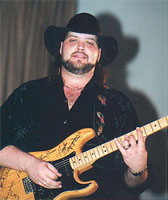 Country-rocker Clay Davidson grew up in a large musical family in Saltville, VA. He moved to Nashville in 1995 to get into the country music business and was signed to Virgin Records Nashville, which released his debut album, Unconditional, in 2000.
In early 2001, Virgin Records announced that it would be closing its Virgin Nashville branch. Virgin's artist roster was transferred to Capitol Records. However, he did not record any albums or singles during his tenure on Capitol. On July 20, 2001, Davidson and his road band were in a bus accident outside Effingham, Illinois. He and his bandmates suffered only minor cuts and bruises, and several concerts had to be cancelled.
Clay now plays in the band Caution out of Glade Spring, Virginia.