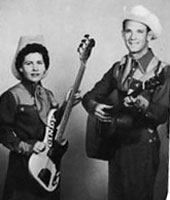 A popular husband and wife singing duo from the 40s to the mid-60s. They were Bob (b. Robert Dean, 26 October 1919, Elkton, Virginia, USA) and Cindy (b. Cindy Morris, 24 December 1924). In 1946, Bob with guitarist Leon Baxter and fiddler Harold Dean (no relation) began playing honky tonks and small beer joints in the Washington, DC area. After they recorded ‘Maple On The Hill’ for a local label, air-play by Connie B. Gay, onTown And Country Time, led to further recordings and gained them work as openers for touring acts. In 1948, after marrying Cindy, the death of Bob’s father saw the couple return to Virginia, where Cindy began singing with her husband, after he formed a new band. It included two-time State fiddle champion Eddie Michael and with Cindy playing bass fiddle, they began playing venues as the Bob And Cindy Show. They gained their first regular show Sweethearts Of The Air on WSVA Harrisonburg but were soon also performing at numerous venues throughout Virginia and West Virginia. During the late 50s, they were regulars at the popular tourist venue Ed’s Park, near Harrisonburg, where they also organised the bookings of the major stars that played there. When the venue closed, in 1960, they toured but Bob also hosted a popular country music programme on radio in Warrenton. They recorded a few sides for Starday in 1958 but made their final recordings including the self-penned ‘Destination Moon’, in 1965. They retired, in 1966, to look after their four children and were later rewarded for their contributions to the music by their election to the Virginia Hall Of Fame. In 1986, a compilation of some of their recordings, including two previously unissued songs, was released by Cattle Records of Germany.