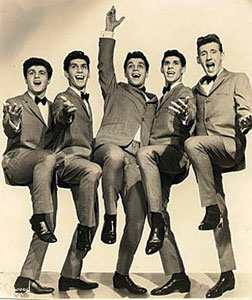 R&B artists the Del-Satins had few peers as practitioners of white doo-wop in the 60s. They were formed in 1958 in Manhattan, New York, USA, by Stan Zizka, Fred Ferrara, his brother Tom Ferrara, Leslie Cauchi and Bobby Fiela. The Del-Satins was chosen as their name in open tribute to their principal influences, the Dells and Five Satins. Under the new name they secured a recording contract with End Records. Their debut single, ‘I’ll Pray For You’, was released in 1961. New management was sought with Passions manager Jim Gribble, who found them a more permanent contract at Laurie Records. Their label star Dion was at the time grappling with diminishing chart returns after an impressive start, and wanted to replace his existing backing band, the Belmonts, with a ‘rockier’ troupe. The Del-Satins were instantly sent to work on Dion’s new song, ‘Runaround Sue’, a two-week number 1 in the Billboard charts. Although their contribution to the hit was substantial, the Del-Satins received none of the credit. They stepped out on their own for ‘Counting Teardrops’ for Winn Records, before reuniting with Dion for ‘The Wanderer’, which stalled just one place short of the number 1 spot in the US charts. The follow-up, ‘Lovers Who Wander’, peaked at number 3, emphasizing the power of the Dion/Del-Satins coalition. While the combination was charting once more with the kazoo-led ‘Little Dianne’, the Del-Satins released ‘Teardrops Follow Me’, their first own-name outing to garner serious sales, after which they found regular work on television (Alan Freed) and radio (Freed and Murray The K). Back with Dion for the number 5 ‘Love Came To Me’, the Del-Satins’ own ‘Does My Love Stand A Chance’ did not fare well. In 1962 they moved to Columbia Records as part of Dion’s new contract, which began with a version of the Drifters’ ‘Ruby Baby’, another substantial hit at number 2. Still frustrated by their lack of recognition, in 1963 the Del-Satins auditioned for Phil Spector but declined his subsequent invitation to record with him. Meanwhile, in appreciation for their past efforts on his behalf, Dion wrote a song for the Del-Satins for single release, ‘Feeling No Pain’, but without his name to accompany it there was no chart return. Two more hits with their mentor followed, ‘Donna The Prima Donna’ and ‘Drip Drop’, before new manager Jay Fontana found the group a home at Mala Records. This relationship lasted for only one single, ‘Two Broken Hearts’, before three more efforts at B.T. Puppy Records. These included a rendering of the Drifters’ ‘Sweets For My Sweet’, but afterwards Ziska left (for the Magnificent Men) and was temporarily replaced by Carl Parker. In 1966 the Vietnam War robbed the group of Cauchi and Tommy Ferrara, but the Del-Satins continued to play live with the addition of Richard Green, Mike Gregorio and Johnny Maestro (ex-Crests). When Cauchi returned he and the Del-Satins became Brooklyn Bridge. In 1991 the original Del-Satins re-formed for nostalgia shows.