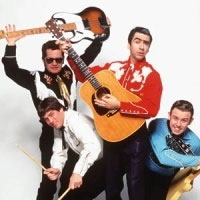 A honky tonk band following the tradition set by Buck Owens, Austin, TX's Derailers were led by vocalist/rhythm guitarist Tony Villanueva and lead guitarist Brian Hofeldt, longtime friends who grew up together in Oregon. After playing in various Portland-area rockabilly outfits, Villanueva relocated to Texas at the age of 19, and Hofeldt soon tagged along; after settling in Austin, the duo joined forces with Vic Gerard Ziolkowski, the bassist in a band called Two Hoots & a Holler, and began focusing on playing straightforward honky tonk music. In 1995 the Derailers issued their first LP, Live Tracks; following their second release, 1996's Jackpot, Terry Kirkendall became the group's permanent drummer. Reverb Deluxe appeared in 1997, and two years later the Derailers returned with Full Western Dress. By this point the lineup had shifted to include drummer Scott Matthews and bassist Ed Adkins. Here Come the Derailers appeared in 2001; it was the band's first for Sony's Lucky Dog imprint and featured a slicker version of their signature sound, designed for larger exposure. Genuine, their second effort for the major label, appeared in March 2003. It included songwriting contributions from Jim Lauderdale and Al Anderson. Change was in the wind for the Derailers soon after Genuine was released; Villanueva amicably split with the band in order to become a pastor, Hofedt stepped into the forefront on Vocals and guitar, and the band recruited steel guitarist Chris Schlotzhauer and pianist Sweet Basil McJagger to round out the lineup. Dissatisfied with the direction the band's sound had taken under Sony, the Derailers went to Palo Duro for their next release, 2007's Soldiers of Love. Produced by Buzz Cason, the album found the band turning away from the slick Nashville sound of Genuine and upping the rock vibe that characterized much of its earlier work. Under the Influence of Buck, a 13-track tribute to Buck Owens, was also released in 2007. Guaranteed to Satisfy appeared in 2008, followed by Live! From Texas in 2010.