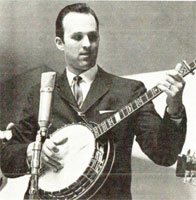 Bill Emerson is one of the most influential musicians in bluegrass. He began playing guitar in 1955 and banjo the following year, which was when he heard a performance by Uncle Bob & the Blue Ridge Partners on a Rockville, MD, radio station. He was so captivated by their sound that he went to the station to meet them, and was asked to join them. A few months later, Emerson joined Buzz Busby & the Bayou Boys. When an auto accident put Busby and some of the bandmembers out of commission, Emerson and bandmate Charlie Waller assembled a new band, the Country Gentlemen, to keep their booking at the Admiral Grill in Bailey's Cross Roads, VA. They recorded three singles for Dixie and Starday, including "High Lonesome" b/w "Hey Little Girl." In 1958, Emerson left the Gentlemen to play live gigs with the Stonemans, later playing with Bill Harrell, Jimmy Martin & the Sunny Mountain Boys, and Red Allen & the Kentuckians. In 1963, he appeared on the Jimmy Martin album This World is Not My Home.
While playing with Allen, he recorded a few albums as Bill Emerson & His Virginia Mountaineers, including Banjo Pickin' n' Hot Fiddlin' Country Style. In 1965, he left Allen's band and rejoined Jimmy Martin's for two albums. Emerson left again in 1967 and teamed up with Cliff Waldron to form Emerson & Waldron & the Lee Highway Boys. The group recorded three albums for the Rebel label, including Bluegrass Country. He returned to the Country Gentlemen in 1970, playing club dates and recording with them until 1972, when he was hit in the arm during a drive-by shooting as he and the band were leaving the Red Fox Inn in Bethesda, MD. He recovered fully and joined the U.S. Navy Band the next year.
Emerson's 20-year military stint was spent playing music in Washington, D.C., doing outside session work, and performing with his country/bluegrass band, the Country Current. Beginning in 1988, Emerson recorded two solo albums for Rebel, Home of the Red Fox (1987) and Gold Plated Banjo (1991). He was also honored by Sterling Banjo Works, who issued a Signature Series of banjos ("Bill Emerson Red Fox Model") and gear after him. Emerson released his Reunion album in 1992, which features various lead singers he had worked with over the years, including Jimmy Martin, Charlie Waller, and Tony Rice. He finally left the Navy in 1993 and subsequently released a duet album with protégé Wayne Taylor. His recorded output continued with Banjo Man in 1996, and Bill Emerson & the Sweet Dixie Band issued their eponymous Rebel debut in 2007. Emerson and the band returned in January 2010 with Southern (Emerson's sixth album as soloist or bandleader during his half-century career), a 12-track contemporary and traditional bluegrass album on the Rural Rhythm label featuring songs written by the likes of Vince Gill, Chris Hillman, Hazel Dickens, and Marty Stuart. Bill Emerson & Sweet Dixie remained a popular bluegrass festival draw as the new millennium's first decade drew to a close.