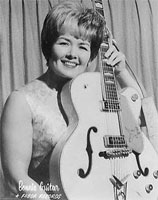 Best remembered for her wistful 1957 pop hit "Dark Moon," Bonnie Guitar also co-founded the famed Dolton label, which launched the careers of the Fleetwoods and the Ventures. Born Bonnie Buckingham in Seattle on March 25, 1923, she began playing guitar and writing songs as a teen, and spent much of the 1950s working as a session guitarist for Fabor Robinson's Los Angeles-based Fabor, Abbott and Radio labels, earning her professional surname in the process. Guitar played on sessions for the likes of Jim Reeves, Dorsey Burnette, Ned Miller, and the DeCastro Sisters, but aspired to a recording career of her own -- although "Dark Moon" was earmarked for Burnette, she admired the song so much that she agreed to waive her royalty rights if Robinson would let her record it instead. First issued on Fabor in 1956, Guitar's simple, lovely performance was then licensed to Dot, where it hit number six in the spring of 1957; when the follow up, "Mister Fire Eyes," failed to rise higher than number 71, Robinson terminated her contract and she returned to Seattle, forming Dolphin Records with refrigerator salesman Bob Reisdorff. Soon renamed Dolton, the label was ostensibly launched as a platform for Guitar singles like "Candy Apple Red" and "Born to Be With You," but her recording career was quickly superseded by that of the Fleetwoods, a high-school trio from nearby Olympia who, in 1959, topped the national charts with the classics "Come Softly to Me" and "Mr. Blue." Not long after signing the Ventures, who quickly scored with their monster hit "Walk Don't Run," Guitar left Dolton to return to Dot -- now positioned for the country charts, she recorded a series of LPs for the label during the mid-'60s, scoring the top ten hits "I'm Living in Two Worlds," "(You've Got Yourself) A Woman in Love," and "I Believe in Love." In 1969, she also teamed with Buddy Killen for the hit duet "A Truer Love You'll Never Find (Than Mine)." Although Guitar's profile diminished during the 1970s, she continued recording for labels including Columbia and MCA, cracking the country charts one last time in 1980 with "Honey on the Moon." In 1986 she signed to Tumbleweed for two LPs, Yesterday and Today, and continued playing live until her 1996 retirement.
Bonnie Guitar died on January 13, 2019