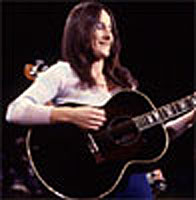 Linda Hargrove was a singer, songwriter, and multi-instrumentalist who forever seemed to be in the wrong place at the wrong time. In the mid-'70s, she was one of the first Nashville artists to blend country sounds with a modern pop/rock sheen; by the time that such a hybrid came to dominate the charts a decade later, however, Hargrove was largely out of the music industry.
Born in Tallahassee, FL, on February 3, 1949, Hargrove began playing piano and guitar while still a preteen. Throughout her formative years, she was largely unresponsive to country music, preferring instead pop and R&B, and by the tail end of the 1960s was performing in a local blue-eyed soul band. It was not until the release of Bob Dylan's Nashville Skyline album that she became fascinated by the possibilities which country music offered; when another Florida group, After All, decided to record seven of Hargrove's songs, she followed the band to Nashville in 1970. A year later, Sandy Posey recorded Hargrove's "Saw Someone Else Before Me," which brought her to the attention of producers Billy Sherrill and Pete Drake, who helped the fledgling performer find work as a session guitarist and songwriter.
In 1973, Leon Russell recorded a pair of Hargrove tunes for his country album Hank Wilson Is Back. In the same year, Drake introduced her to ex-Monkee Michael Nesmith; together with James Miner, Hargrove and Nesmith co-wrote the song "Winonah," which the latter recorded for his Pretty Much Your Standard Ranch Stash album. Nesmith also signed Hargrove to his short-lived experimental C&W label Countryside; she recorded an LP for the label, but it never saw the light of day after Countryside was dropped by its parent company, Elektra/Asylum. Elektra did, however, release her 1973 album Music Is Your Mistress, as well as its follow-up, the next year's Blue Jean Country Queen.
In 1975, Hargrove moved to Capitol Records, for whom she released her only Top 40 hit, "Love Was (Once Around the Dance Floor)," from the LP Love, You're the Teacher. In the same year, Johnny Rodriguez took her composition "Just Get Up and Close the Door" to the top of the charts. She released two more country albums, 1976's Just Like You and 1977's Impressions, but found little commercial success. Shortly thereafter, she began to focus exclusively on inspirational music, and under her married name of Linda Bartholomew released the Christian album A New Song in 1981. She was largely out of music for the next several years until issuing another inspirational record, Greater Works, in 1987. Following its release, she again left the industry due to health problems; after recovering from leukemia, in the mid-'90s she began making tentative steps towards resuming her career as a country performer. Linda Hargrove died Oct. 24, 2010.