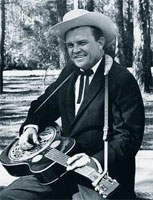 US Bluegrass guitarist, Back in 1951, Clarence Jackson and his Carolina Wranglers were entertaining fans over radio station WJAY in Mullins, South Carolina. Clarence was known as "Carolina's King of the Steel Guitar".
Clarence was appearing on WJAY in two different shows. It appears one was with the group, but no other details were provided. He also had a disc jockey show called "The Old Tobacco Barn" that was on from 5:00am to 9:00am each morning.