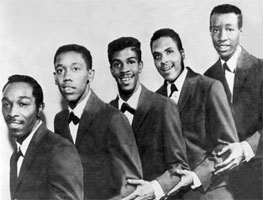 The Jarmels were one of those one-hit wonder groups, responsible for a number 12 single in 1961 entitled "A Little Bit of Soap." If none of their other five singles did remotely as well, that song has lingered in the public consciousness, partly with help from periodic new hit versions by the Exciters in the mid-1960s and Showaddywaddy in England during the 1980s.
The Jarmels came from Richmond, Virginia, where the five members had all begun singing together in church and school. Nathaniel Ruff (b. 1939), Ray Smith (b. 1941), Paul Burnett (b. 1942), Earl Christian (b. 1940), and Tom Eldridge (b. 1941) may have come from Virginia, but the name of the group they formed in the late 1950s came from a street in Harlem. Their manager was Jim Gribble, who also managed the Mystics and the Passions, and brought The Jarmels to Laurie Records in New York in 1961. They were a rather unusual addition to the Laurie roster, for most of the company's artists were white, and sounded more pop than R&B-influenced. The Jarmels combined pop and R&B influences, most notably the sound of the post-1958 Drifters.
Their first single, "Little Lonely One," was a hit in New York but never charted nationally. Their second record, "A Little Bit of Soap," written by future Neil Diamond/Van Morrison manager Bert Berns, (who also produced the Drifters), got to number 12 in America in the summer of 1961 during a six-week run on the charts. This was The Jarmels' first and last chart success, none of their four subsequent singles charting at all. They recorded their last single, "Come on Girl," in 1963, and the group soldiered on for a while into the mid-1960s with numerous personnel changes -- their later membership included Major Harris, who subsequently became part of the Delfonics.