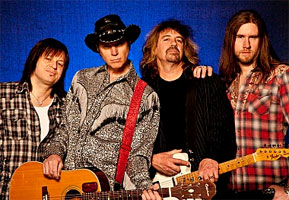 A country/hard rock band formed by Illinois native Jason Ringenberg in 1981, Jason and the Scorchers came careening onto the indie rock scene seemingly out of nowhere (truth was, it was Nashville) with a debut EP whose most killer track (among a slew of killer tracks) was a fire-breathing cover of Bob Dylan's "Absolutely Sweet Marie." This amalgam of speedy hard rock fused with Ringenberg's decidedly country twang, along with the band's ability to deftly negotiate between Rolling Stones-style stomps and quieter, more melodic acoustic country music, led to Jason and the Scorchers becoming a critically lauded and fairly popular '80s band. Capitalizing quickly on the notoriety brought by their debut EP, the Scorchers kicked out two fine LPs (Lost & Found and Still Standing) that sounded perfect for radio, but not so slick as to sound manufactured. With Ringenberg's yowling voice pushed way up front, the band's sonic power came from the synchronous playing of Nashville rock veterans Warner Hodges (guitar), Jeff Johnson (bass), and Perry Baggs (drums). Sharing similar musical backgrounds that valued the music of Hank Williams and Johnny Cash as much as the Stones or Beatles, these guys could crank out mega-amped hard rock one minute and sound like the Flying Burrito Brothers the next, all of it done with great skill and excitement. Despite their obvious talent, by the release of 1986's Still Standing, it seemed as though the band wasn't going anywhere. They had achieved a modicum of success but weren't able to break through to mass acclaim, partly because they came along just before the explosion of country radio in the late '80s/early '90s. Hence, rock radio was reluctant to play them because they sounded too country, and country radio thought they were too rock; it's an old story that usually spells doom for the band in question. After a three-year break that saw Johnson's departure, the Scorchers released a desultory third album (Thunder and Fire) that sounded like a desperate attempt at hard rock credibility. They broke up soon after. Ringenberg went on to record country-oriented solo work, re-formed the original Scorchers in 1994, and released a modest reunion record (A Blazing Grace) that sounded like the Scorchers of old. Two years later, the reunited Scorchers released Clear Impetuous Morning; Midnight Roads followed in 1998. Rock on Germany appeared three years later, Halcyon Times arrived in 2010.