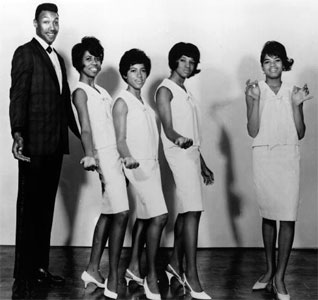 The Jelly Beans were a mixed voice quintet (later a quartet) comprised of one man (Charles Thomas) and four women (Alma Brewer, Diane Taylor, Elyse Herbert, Maxine Herbert) who got together while attending high school in Jersey City, NJ. That was where their manager discovered them in 1963, and he brought them to the attention of songwriters Jerry Lieber and Mike Stoller, who were starting up a record label, Red Bird, in association with End/Gone Records founder George Goldner.
The group was put into the hands of songwriters Jeff Barry and Ellie Greenwich, then near the peak of their output together, who gave them "I Wanna Love Him So Bad." The third single issued by Red Bird, it reached number ten on the Billboard charts. The Jelly Beans' second single, "Baby Be Mine," didn't reach the Top 50, however, and although The Jelly Beans left behind enough songs for an album, none was forthcoming. By 1964, Red Bird had bigger acts to worry about, including The Shangri-Las and The Dixie Cups, and the group was gone from the label by the end of that year. A final single release on Eskee failed to chart, and The Jelly Beans had broken up by 1965.