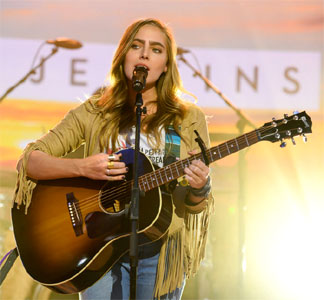 Delivering a hybrid of contemporary country and pop with a smoky voice and a direct lyrical style, singer, songwriter, filmmaker, and actress Lauren Jenkins began touring with her music at the age of 15. As an adult, she balanced her time between New York, Los Angeles, and Nashville as she pursued film projects alongside songwriting collaborations and time in the studio. After over a decade in music, her first album, No Saint, saw release in 2019.
Born in Texas and raised in South Carolina, Jenkinswas playing her songs in clubs along the East Coast by the age of 15 and performing regularly in New York City by 17. She soon relocated there, both for the performance opportunities and to study acting. She eventually began splitting her time between New York and Los Angeles. She held multiple crew positions on the 2009 film Cigarette Girl before appearing onscreen as a bartender in the feature film N-Secure and the TV movie Touch Trade, both from 2010. Jenkins was then cast as a lead in the 2012 film Deadline. Still committing time to her music, she eventually came to the attention of Big Machine Records, which signed her in 2014 and issued The Nashville Sessions EP in 2016.
In 2017, Jenkins directed a music video for singer/songwriter Ingrid Andress' song "The Stranger," and a year later, she starred in the short film Running Out of Road, a Western that she co-wrote with its director, Cole Smith. By then also based in Nashville part-time, she collaborated with songwriters including Ross Copperman, Shane McAnally, Liz Rose, and Trey Bruce for her full-length debut. With the bulk of the tracks produced by Jenkins with Julian Raymond (Glen Campbell, Sugarland), No Saint arrived via Big Machine in March of 2019.