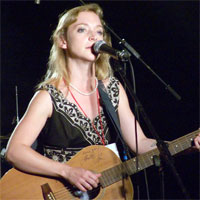 Although her country-flavored and blues-infused version of contemporary folk (which also can include healthy doses of rockabilly and surf) has drawn comparisons to musicians like Lucinda Williams, Gillian Welch, Jolie Holland, and the Be Good Tanyas, Eilen Jewell's strongest influences have been the classic sides recorded by Bessie Smith and Billie Holiday (the latter artist is no doubt the source for Jewell's characteristic and surprisingly effective stretched, slowed, and even slurred Vocals mannerisms). Born and raised in Boise, Idaho, Jewell began piano lessons at the age of seven and picked up the guitar when she was 14. She also fell under the powerful spell of Smith and Holiday (along with discovering other artists like Bob Dylan and Howlin' Wolf). While attending St. John's College in Santa Fe, she began playing the local farmers' markets and bars. She moved to Los Angeles, then relocated all the way across the country in early 2003 to western Massachusetts, and later in the year she moved to Boston, where she threw herself into the vigorous local music scene. She recorded a live demo album in 2005 called Nowhere in No Time and put out the self-released studio project Boundary Country a year later in 2006. The critical response to Boundary Country led to her signing with Signature Sounds, and Jewell's first national release, Letters from Sinners & Strangers, appeared from the imprint in 2007. A second album from Signature Sounds, Queen of the Minor Key, was released in 2011. The next few years were spent touring the U.S. and around the world, culminating in the 2014 live double-album Live at the Narrows. After relocating back to her hometown of Boise, Idaho, Jewell released her fifth album, 2015's Sundown Over Ghost Town. On 2017's Down Hearted Blues, Jewell indulged her passion for vintage blues with covers of a dozen of her favorites in the genre.