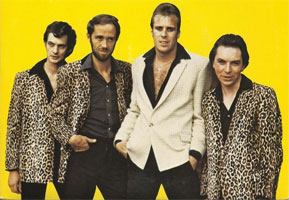 Johnny and the Jailbirds were formed at the end of 1973, when Johnny moved from London to Northamptonshire.  An advert was placed in the local newspaper to recruit musicians interested in forming a rock ‘n’ roll band.  The response was immediate and after a few rehearsals, and the first gig in a local village club, Johnny & The Jailbirds were born.
It wasn’t long before the band had gained a huge following on the rock ‘n’ roll circuit in the UK and abroad.
Record companies were becoming very interested in this new band, and Charly Records was to eventually sign them in 1979.  One of the main turning points in the band’s career was the arrival of lead guitarist and songwriter, Ritchie Ball.  Johnny had now found a new partner to write the many songs they produced in those early years, including the eight that appeared on the first album, Out On Bail, the most well known of which appeared in the top 5 of the French rock ‘n’ roll charts, Eileen and Too Much Wine.
The album was a great success worldwide, and it seemed that every European teddy-boy had it in his collection.