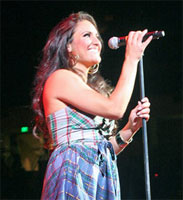 Sarah Johns grew up in Pollard, KY, and spent much of her youth singing in her church choir. Forbidden by her parents to listen to secular music, Johns began sneaking home Patsy Cline and Tammy Wynette cassettes, which later helped inform her songwriting. After her church soundman encouraged her, she began performing shows outside of the church, recorded a demo, and shopped it around Nashville to no avail. While Johns was attending the University of Kentucky, she performed regularly at a local restaurant, which led to a chance meeting with Toby Keith's manager, who advised her to move to Nashville. Within a month she followed up on his advice, quit school, and moved to Nashville, where she secured a job cleaning tour buses. After a year and change, she was offered the chance to tour with Keith, performing two songs with his band as a guest performer. She gained great attention on that tour with her song "The One in the Middle," and as a result was signed to Sony's BNA subsidiary, which released her debut album, Big Love in a Small Town, in August of 2007.