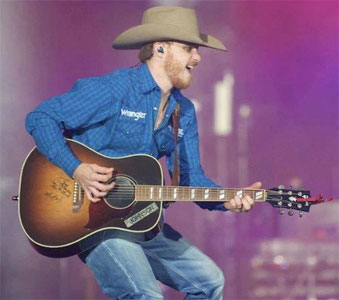 Born in the small east Texas town of Sebastopol on May 21, 1987, Cody Johnson was raised in a musical family. Learning guitar at the age of 12, Johnson played in bands in high school, but he was drawn to bull riding. He competed professionally for a while, but when that dried up, he signed up for a job as a prison supervisor with the Texas Department of Criminal Justice in Hunstville.
Johnson decided to give country music a go in 2006, forming the Cody Johnson Band. With his father on board in the band, he cut a debut called Black and White Label, issuing it on his own label CoJo in 2006. Adding guitarist Matt Rogers, the group knocked out the concert album Live And Rocking in 2007; the album turned out to be his father's farewell. Adding bassist Danny Salinas, Johnson released Six Strings One Dream in September of 2009, and the record began making headway among Texas country circles not long afterward. Rounding out his band with guitarist Jeff Smith and fiddler Jody Bartula, Johnson released A Different Day in 2011. The album elevated his presence in the Lone Star State, snagging him Texas Regional Music Award's New Male Vocalist of the Year and allowing him to quit his job as a prison supervisor.
Reteaming with Trent Willmon, who produced A Different Day, Johnson released Cowboy Like Me in January 2014. The album proved to be his breakthrough into the country mainstream, reaching seven on Billboard's Country Albums charts and 33 on their Top 200. Gotta Be Me did even better in 2016, reaching two on Billboard's Country Albums Charts and peaking at eleven on the Top 200. This was enough to secure Johnson a contract with Warner Music Nashville, who put out the single "On My Way to You" in 2018-it reached 24 on the Country Airplay chart-and the full-length Ain't Nothin' To It in January 2019.