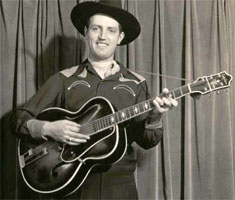 Back around summer of 1953, Rome Johnson was doing his singing and guitar playing over radio station WNOP out of Newport, Kentucky between 11:30 and noon every Saturday. He was appearing in person at the "Village Barn" in Covington, Kentucky six nights a week, too. Rome was a native of the Bluegrass state and his professional career was said to have started at the age of 15.
Among his other radio station stints prior to this were: WXYZ, Detroit - WOAI, San Antonio - WLW, Cincinnati - WLAP, Lexington.
Rome also recorded a few tunes for the King label. Among his tunes were "Waltz of the Wind", "Look To The Sea". His current record out at that time was one of his own compositions, "Foolish Me For Loving You".