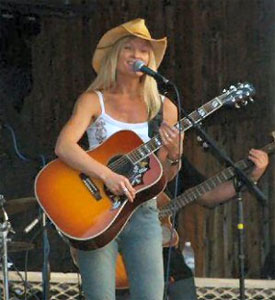 A singer with a rich, clear voice and plenty of true-to-life stories to tell with it, Tresa Jordan was born in Melrose, FL, a small coastal town where her father played drums in a local band on weekends. When Jordan was nine years old, her father let her come on-stage and sing a song with the band, which first sparked her ambitions to become a musician. Jordan attended the Florida School of the Performing Arts for two years, and after graduating, she and a close friend moved to Nashville, TN, in hopes of breaking into the music business. Before Jordan could make much of an impression in Music City, she fell in love with another aspiring singer/songwriter and when they decided to get married, Jordan's career took a back seat as the couple had three children and she stayed home to help care for them. After not quite seven years of marriage, Jordan and her husband divorced, and she began writing songs again as a way to deal with her feelings about her broken relationship and starting life over again. Jordan's new burst of songwriting energy encouraged her to take another stab at a career as a musician, and she began making the rounds of music clubs in Tennessee and Florida. In 2006, Jordan released her self-titled debut album through the independent South River Road Records; a set of heartfelt country tunes accompanied by beautifully crafted acoustic arrangements, Jordan's album won enthusiastic reviews in the country and bluegrass press, and it was reissued by the nationally distributed Aspirion label in 2007, with the tunes "I Turn to Country" and "Angels Cry" earning radio and video play.