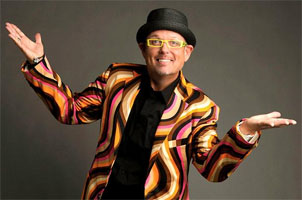 Country music's answer to Weird Al Yankovic, Cledus T. Judd had a similar approach to song parody, recording backing tracks that were as similar as possible to the original versions. Like Yankovic, he also recorded some original material, but parodies of recent country hits were his bread and butter; also like Yankovic, a Judd parody came to be regarded as a badge of honor by many of the artists he reworked. Judd made his bow in 1995 with the Razor & Tie album Cledus T. Judd (No Relation), a billing that made clear his lack of connection to Wynonna and Naomi. His breakthrough set was the follow-up, 1996's I Stoled This Record, which established his long-running preoccupation with Shania Twain -- not only did he transform her "If You're Not in It for Love (I'm Outta Here)" into "I'm Not in Here for Love (Just Yer Beer)," he also recorded the original "If Shania Was Mine" and had her guest (along with Joe Diffie) on "(She's Got a Butt) Bigger Than the Beatles." Did I Shave My Back for This?, the title cut a parody of Deana Carter, followed in 1998, also featuring redone material from Brooks & Dunn and Tracy Lawrence, among others. Released in 1999, Juddmental saw him branching out into pop with a Ricky Martin parody as well as a Garth Brooks/Chris Gaines send-up and another ode to Twain, "Shania I'm Broke."
Judd's albums weren't blockbusters, but they sold consistently enough to earn him a major-label contract with Sony's revived Monument imprint. His 2000 major-label debut, Just Another Day in Parodies, skewered material by the Dixie Chicks, Brad Paisley, Kenny Chesney, Toby Keith, and even Kid Rock. The follow-up, 2002's Cledus Envy, offered parodies of Faith Hill and Billy Gilman as well as O Brother, Where Art Thou?'s "Man of Constant Sorrow." Later that year, Judd issued his first holiday album, Cledus Navidad. He returned in 2003 with the mini-album Six Pack of Judd. In 2004 he moved to the Koch label and released Bipolar & Proud, which featured his biggest hit to date, "I Love NASCAR," a parody of Toby Keith's "I Love This Bar." Koch soon closed their Nashville division, just as Judd was about to release his tribute to novelty giant Ray Stevens. The album, Boogity Boogity, finally appeared in 2007 on the Curb label. In 2009, he moved to the E1 label for Polyrically Uncorrect, featuring the single "(If I Had) Kellie Pickler's Boobs." His 2012 effort Parodyziac!! landed on Warner Bros. with the NFL tribute "Tebow" plus "Living Single in a Double Wide."