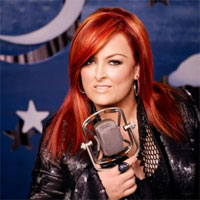 As one half of the Judds, Wynonna Judd became one of the most popular and respected female country stars of her time. On her own since the early '90s, Judd demonstrated an eclecticism that increasingly confounded hardcore country fans and radio programmers but also helped her retain a core of admiring followers. Her solo records might stick with Judds-style country-pop or delve into roots rock, blues, gospel, adult contemporary pop, folk, or Southern R&B.
Judd was born Christina Ciminella in Ashland, KY, on May 30, 1964. Her mother, Naomi (then known by her birth name, Diana), was still in high school at the time, and her biological father abandoned the family almost immediately; Naomi married another man, Michael Ciminella, to create a traditional family unit. In 1968, they moved to Los Angeles, but the marriage disintegrated in 1972. Wynonna spent parts of the next few years living on welfare and returned to Kentucky with her mother in 1976. They lived in a mountain home with no phone or television, and listening to country music on the radio was a major source of entertainment. Wynonna learned to play guitar after receiving one as a gift and was soon singing close harmony with her mother. By the time she was a teenager, her Vocals talents were apparent, and in 1979, the family moved to Nashville to try their luck in the music business. Naomi and Wynonna landed a contract with RCA in 1983, and over the remainder of the '80s, they became the biggest-selling duo in country music history (a title that would later be taken over by Brooks & Dunn). Wynonna wasn't always as career-minded as her mother, who effectively ran the group, and was growing ever more rebellious when, in 1990, Naomi was diagnosed with hepatitis C; she retired from performing after a farewell tour in 1991.
Wynonna was at first unsure whether she wanted to carry on without her mother but quickly decided to embark on a solo career, signing with MCA. Her first album on her own, Wynonna, was released in 1992 and was an instant smash, selling over three million copies; it also topped the country charts, reached the Top Five on the pop side, and earned many positive reviews as well. Her first three solo singles — "She Is His Only Need," "I Saw the Light," and "No One Else on Earth" — all went to number one on the country charts, and "My Strongest Weakness" also made the Top Five. Judd's 1993 follow-up, Tell Me Why, was another platinum-selling, number one country/Top Five pop album; it gave her five more Top Ten hits in the title track, "Only Love," "Girls with Guitars," "Rock Bottom," and "Is It Over Yet." However, Judd's career hit a snag when it was revealed that, like her mother before her, she had become pregnant out of wedlock. The tabloids had a field day, and more conservative country fans attacked her as being an immoral role model.
Judd eventually married her son's father, Nashville businessman Arch Kelly, in 1996, and that year she finally released her third album, Revelations. It was a more introspective affair that gave her a number one single in "To Be Loved by You" and eventually went platinum despite not producing any further Top Ten hits. For the follow-up, 1997's The Other Side, Judd refashioned her sound into a bluesy, rock-driven roots music blend that often recalled Bonnie Raitt. It reached the country Top Five yet failed to sell a million copies for the first time in Judd's solo career, prompting her to split with MCA and move to Mercury. By this point, Judd had also had a second child, but her marriage fell apart in 1998; instead of releasing another solo album right away, Judd reunited with her mother for a New Year's Eve concert to ring in the year 2000. They embarked on a full-fledged tour together in 2000, and four new Judds songs were released on an exclusive bonus disc with Wynonna's Mercury debut, New Day Dawning. Her most eclectic effort to date (and her first as a co-producer), the album featured covers of Joni Mitchell and the Fabulous Thunderbirds, and while it didn't spawn any major hit singles, it again climbed into the Top Five on the country album charts.
Judd returned to her country roots in 2003 with What the World Needs Now Is Love, which found her reuniting on one track ("Flies on the Butter") with her mother. The live Her Story: Scenes from a Lifetime, released on DVD and CD, arrived in 2005, hitting number two on the Top Country Album charts, and the next year, just in time for the holiday season, the singer released Classic Christmas. An album of covers and standards, Sing: Chapter 1, appeared in 2009.