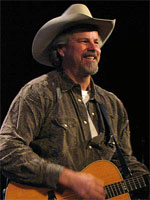 US Country singer born January 11, 1956 in Houston (Texas). Among the large contingent of talented songwriters who emerged in Texas in the 1980s and '90s, Robert Earl Keen struck an unusual balance between sensitive story-portraits ("Corpus Christi Bay") and raucous barroom fun ("That Buckin' Song"). These two song types in Keen's output were unified by a mordant sense of humor that strongly influenced the early practitioners of what would become known as alternative country music. Keen, the son of an oil executive father and an attorney mother, was a native of Houston. His parents enjoyed both folk and country music, and his own style would land, like that of his close contemporary Nanci Griffith, between those genres. Keen wrote poetry while he was in high school, but it wasn't until he went to journalism school at musically fertile Texas A&M that he learned to play the guitar. He and Lyle Lovett became friends and co-wrote a song, "This Old Porch," which both later recorded.
Keen made a splash in Austin with his debut album, No Kinda Dancer, self-financed in 1984 to the tune of $4,500. He moved to Nashville during the heady experimentalism of the '80s that saw Lovett and k.d. Lang hit the country Top Ten, but he soon returned to Austin. Texas landscapes and residents provided Keen with creative inspiration, as his second album, West Textures, made clear; that album yielded one of Keen's signature numbers, an ambitious crime-spree song called "The Road Goes on Forever." Now recording for Sugar Hill, Keen recorded a live album shortly after West Textures but waited several years to release a studio follow-up, 1993's A Bigger Piece of Sky. After that album (which contained "Corpus Christi Bay") came Gringo Honeymoon (1994), which merged Keen's story-songs with the emerging sounds of alt-country: guitars were laid down by the influential Austin musician Gurf Morlix, who later produced albums for both Keen and Lucinda Williams, and a young Gillian Welch provided harmony Vocals.
Once again, after taking his career to a new stage, Keen recorded a live album (No. 2 Live Dinner, 1996) and took time to accumulate new material. The 1997 album Picnic, his first for the Arista Texas label, again moved in the direction of alternative country, featuring Keen in a duet with the Cowboy Junkies' Margo Timmins, while 1998's Walking Distance featured sparer textures. Whatever production style surrounded his songs, Keen's musical personality seemed consistent, and his live shows, widely known thanks to a touring schedule that often approached 200 dates a year in the '90s, grew organically in depth and control. In the early 2000s, Keen signed with the Lost Highway label and released the album Gravitational Forces (2001). He also devoted time to his influential annual concert series and talent festival, Texas Uprising, which took place at several venues around Texas and the Far West.
The year 2003 saw the release of his eighth studio album, the amiable Farm Fresh Onions, as well as The Party Never Ends: Songs You Know from the Times You Can't Remember, a compilation of Keen's Sugar Hill days. His next release was 2005's What I Really Mean for the Koch label. It was followed in 2006 by Live at the Ryman. Rose Hotel, his first recording with famed producer Lloyd Maines, appeared in 2009 on Lost Highway. Keen decided to experiment for his next album, and began writing on the road instead of in his small, solitary cabin in the hinterlands of Texas. Once again recruiting Maines as producer, he cut 11 new songs -- among them nine originals including a re-recording of "Paint the Town Beige" from 1993's Bigger Piece of Sky -- and a couple of covers. It was released as Ready for Confetti on Lost Highway in the summer of 2011. Three years later, Keen and Maines made their way back to the studio with a band of first-rate acoustic pickers (including Danny Barnes of the Bad Livers) and some high-profile duet partners (Lyle Lovett and Natalie Maines) to record a collection of classic bluegrass covers; the album, Happy Prisoner: The Bluegrass Sessions, was released by Dualtone in February 2015. That same year, Keen returned to John T. Floores Country Store in Helotes, Texas to play a concert celebrating the 20th Anniversary of the No. 2 Live Dinner album. The show was recorded for posterity, and was released in 2016 as Live Dinner Reunion. The album included a number of Keen's best-known tunes, as well as guest appearances from Joe Ely, Lyle Lovett, Cody Canada, and Bruce Robison.