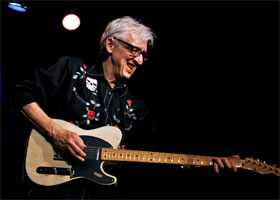 Bill Kirchen is best known for his work in the '70s with the rebel band Commander Cody & His Lost Planet Airmen. Leading the way, this gang of rock & roll honky tonkers cut a wide path through country and rock, creating an intersection where both could meet and meld together their many guises effortlessly.
Bill Kirchen was a dominating force behind the success of the Airmen. Meeting up with George Frayne, later known as Commander Cody, in his hometown of Ann Arbor, Michigan, set the wheels of Kirchen's musical career into motion.
Born and raised in Ann Arbor, the future guitar god first learned to play the trombone. While in high school he met folksinger David Siglin and proceeded to place himself in the middle of the local folk scene. This was a training ground for Kirchen's prospective endeavors. He learned to play banjo and guitar. His fascination with folk eventually segued into an interest in the blues and string bands. While still in college, Kirchen started his own band, an outfit best described as "psycho folk-rock." It was around this same time that Detroit-based Frayne and future airman John Tichy decided to put a country band together. Having gone to the University of Michigan, Ann Arbor, Kirchen, Frayne, and some of the other Airmen knew each other, thus Commander Cody & His Lost Planet Airmen were born.
By 1969 Kirchen knew something had to be done or the band would idle away in obscurity. Aware of the music coming out of San Francisco, he convinced the rest of the band to move to the West Coast, where they took off and became legendary outlaws, lauded by Waylon Jennings and Willie Nelson as well as the Allman Brothers and the Grateful Dead. Kirchen's power as a vocalist, player, performer, and songwriter began to solidify. Known for his Vocals treatment and hot guitar licks on "Mama Hated Diesels" and the ever popular "Down to Seeds and Stems Again Blues" from two of their preeminent releases, Hot Licks, Cold Steel & Truckers' Favorites and Lost in the Ozone, respectively. As a performer Kirchen came into his own while on-stage in Austin for the live recording of the critically acclaimed Live From Deep in the Heart of Texas, recorded in November of 1973 at the Armadillo World Headquarters. Kirchen's work during this phase in the all-too-short career of Commander Cody & His Lost Planet Airmen is still remembered with awe.
The 1976 breakup of the band lead Kirchen to form the Moonlighters, a swing orchestra. British star Nick Lowe, who'd become interested in Kirchen's work while he was still with the Airmen, sought him out. The two formed a bond that remained intact years later. As the producer of the first Moonlighters album, Lowe found a soul mate in the talented American. Kirchen toured internationally with his friend and even joined him in the studio. While in England, Kirchen's style was a hot property as is evidenced by his participation on recording projects for Elvis Costello, rockabilly king Gene Vincent, and Link Wray.
By 1986 Kirchen had moved to the Washington, D.C., area, establishing himself as a leader on the music scene. Prior to his signing on with Black Top Records in 1994, Kirchen recorded Tombstone Every Mile. This high-powered project was initially released on Costello's label, Demon Records, in England. Available in the States on Black Top, this was just the beginning of Kirchen's personal recording renaissance.
1996 was the year Kirchen saw the release of Have Love, Will Travel. Critically acclaimed, it is an eclectic disc that displays the various aspects of Kirchen's artistry and talent. Praised as one of the pioneers who marked territory for a new radio format, Americana, this still-wild guitar slinger is also noted as a forefather of the twangcore movement that encompasses everyone from the king of California, Dave Alvin, to rockabilly bands and roots rock outfits like Big Sandy & His Fly-Rite Boys and Wilco. It is also believed that fellow madman Junior Brown was given a career boost thanks to Kirchen's dominating spirit, which has served to stand as a point of light for rebels of every stripe and color over these many years. In 1999, Kirchen followed with Raise a Ruckus on Hightone Records.
A proud father married for over 25 years to the same woman, Kirchen has been instrumental in keeping the work of many musical pioneers as more than just memory. Using his 1950s Telecaster and his chameleon-like voice, he has told the tale of Bakersfield's top bard, Red Simpson, and maverick songwriter Blackie Farrell. Ernest Tubb's former man of pedal steel, Buddy Charleton, whose infallible twang and moan can be heard throughout Have Love, Will Travel, is a featured player in Kirchen's world. Always ahead of his time, Kirchen remains a man of distinction who looks at music not as something to be categorized, but as an art form that has no boundaries. Continuing to work with Hightone Records, Kirchen released Tied to the Wheel in 2001, followed by King of Dieselbilly in 2005 and Hammer of the Honkey-Tonk Gods in 2006. In 2010, he released the guest-star-studded Word to the Wise, which featured appearances by Nick Lowe, Elvis Costello, Maria Muldaur, and Paul Carrack; it reached six on the Billboard Top Blues Albums chart. Three years later, he came back with Seeds and Stems, which found him revisiting many old favorites from throughout the years, including "Hot Rod Lincoln" and the title track.