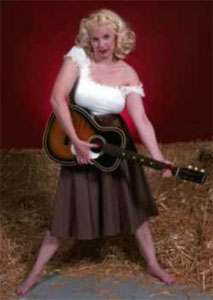 Raised by a single parent, Josie Kreuzer's musical career started at the age of 16. After moving to the city of New Orleans, Kreuzer began seeking out music wherever she could find. From ragtime and Dixieland jazz to Cajun and blues, the teenager religiously watched street musicians write and perform. Her love of music enabled her to become employed at a nearby Tower Records store. Becoming the record purchaser of "oldies" material, Kreuzer discovered not only Elvis Presley and Gene Vincent but Janis Martin, Wanda Jackson, and the Collins Kids in her work. Spending most of her paychecks at the shop, an entire new world opened up to her. At 17, Kreuzer was given a Spanish guitar and began learning some Hank Williams songs. But she wasn't able to find the musical group she wished to perform rockabilly with. After moving to San Francisco, then Austin, and finally Los Angeles in 1992, she formed Whistle Bait, an all-female rockabilly group. The band toured for three years and recorded some material, but those songs were never released. In 1996, the group disbanded and Kreuzer began a solo career. In 1997, she released her debut album Hot Rod Girl on SheDevil Records. In 1999, As Is was released on the same label. Having toured throughout America, Europe, and Australia, Kreuzer released her third album Beggin' Me Back on SheDevil Records. The singer has also performed at the Experience Music Project, the CMJ Conference in 2000, and the High Rockabilly Festival.