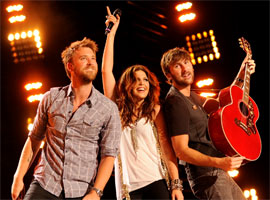 Lady Antebellum walk the line dividing modern country and adult contemporary, specializing in softer songs laden in melody and harmony. "I Run to You," their first Country number one, introduced this blend, but its 2009 sequel, "Need You Now," turned Hillary Scott, Charles Kelley, and Dave Haywood into crossover stars as it peaked at number two on Billboard's Hot 100. The trio continued to reach the pop Top 40, all the while racking up a series of number one singles on Billboard's Country Airplay that offered variations on their soothing country-pop into the 2020s: "American Honey," "Just a Kiss," "We Owned the Night," "Downtown," "Bartender," and "Champagne Night" all topped the Country Airplay charts.
The group formed when Scott met Kelley and Haywood in Nashville, and after a few months of performing around the area, they signed with Capitol Nashville in 2007. Lady Antebellum's first single, "Love Don't Live Here," peaked at number three on the country charts. A self-titled debut album followed in April 2008, featuring production from Victoria Shaw and Paul Worley and stocked with more country hits (including the chart-topping single "I Run to You," which also enjoyed crossover success as a Top 40 pop hit).
Within a year-and-a-half, Lady Antebellum's debut had gone platinum and earned a Grammy nomination, and the band enjoyed their newfound success while putting the finishing touches on a second album. Need You Now appeared in early 2010, and its leadoff single, "Need You Now," became the group's highest-charting song to date, topping the country charts and peaking at number two on the Billboard Hot 100. It eventually sold over three million copies. The album experienced similar success, going gold during its second week of release and reaching platinum status soon after. By early 2011, Need You Now had sold more than three million copies in America alone, and the band took a break from recording a third studio album in order to attend the Grammys, where Lady Antebellum took home five awards.
The band's third studio album, 2011's Own the Night, for which they wrote ten of the 12 tracks and co-produced with Worley, generated a hot single on the country chart right out of the box, "Just a Kiss," which became the trio's fastest-rising single yet and crossed over, topping Billboard's adult contemporary chart. Their next single, "Dancin' Away with My Heart," reached number two on Billboard's country chart. Lady Antebellum released the holiday album On This Winter's Night in the fall of 2012; the record entered the Billboard Top Ten upon its release and was certified gold in the U.S.
In May 2013, Lady Antebellum issued Golden, their fourth full-length studio album. Preceded by the hit single "Downtown," Golden entered the Billboard charts at number one, but its second single, "Goodbye Town," underperformed. The record was revived by a deluxe edition released in November 2013, thanks to the inclusion of the single "Compass." Written by the pop-making machine Stargate, "Compass" became a Top Ten country single in early 2014. The trio quickly followed Golden with 747 in the fall of that year; helmed by Nathan Chapman, it was their first record not produced by Worley. "Bartender," the record's first single, became a Top Ten country single prior to the album's release. 747 produced two other modest hits -- "Freestyle" and "Long Stretch of Love," which appeared in 2015 -- before ending its album cycle.
Lady Antebellum took a hiatus in 2016, with Charles Kelley and Hillary Scott both pursuing solo projects, and then returned in the summer of 2017 with the soft and mellow busbee-produced Heart Break, which was nominated for a Grammy Award. In early 2019, Lady Antebellum did a residency at Palms Casino Resort in Las Vegas and returned with a new single, "What If I Never Get Over You," a few months later. The song was the first single pulled from Ocean, the trio's first album for the Big Machine subsidiary BMLG. Produced by Dann Huff, Ocean appeared in November 2019 and debuted at number two on the U.S. Top Country Albums and at number 11 on the Billboard 200.
In January 2021, Lady A became members of the Grand Ole Opry. That March, they released "Like a Lady," an '80s-leaning retro-pop jam that was inspired by Dolly Parton and Shania Twain. "Like a Lady" heralded the arrival of What a Song Can Do, Lady A's eighth album. Appearing in October 2021, What A Song Can Do was once again produced by Huff and featured cameos by Darius Rucker and Carly Pearce.