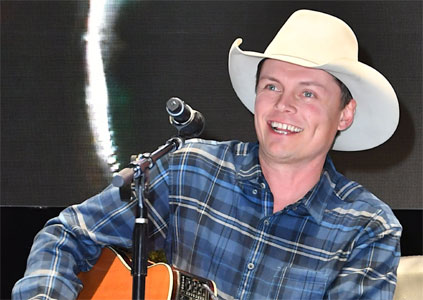 Growing up in a musical family, Wyoming-based singer/songwriter and country & western star Ned LeDoux never had a plan B when it came to a career choice. The son of late cowboy crooner and rodeo champion Chris Ledoux, Ned became part of his father's touring band, Western Underground, in 1998, taking over drum duties from KW Turnbow, who was recovering from injuries sustained in an automobile accident. After Chris Ledoux lost his battle with cancer in 2005, Ned continued to tour with the group, eventually picking up the guitar and performing some of his father's best-loved songs. Impressed by both his talent and remarkable vocal likeness to their fallen bandleader, the group moved LeDoux from behind the kit to the front of the stage. In 2015, he decided to strike out on his own, and after digging through boxes of his father's unfinished songs for inspiration, he headed to Nashville with producer Mac McAnally, who had produced his father's final two albums, and began laying down tracks for what would become his debut EP. The resulting Forever a Cowboy was released in December 2016. LeDoux finally delivered his debut full-length, Sagebrush, in late 2017, hitting number 38 on the Billboard Country Albums chart. A follow-up album, Next in Line, appeared two years later.