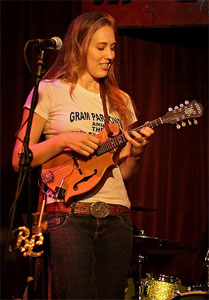 Born Brennen Leigh Hulbert, c. 1984, North Dakota, USA. Singing and playing mandolin, Leigh and her brother, guitarist Seth Hulbert, attracted considerable attention in bluegrass circles, mainly around their home base in the upper Midwest. They had heard music from their piano-playing father’s record collection and established a bond with country music, especially bluegrass, which although contemporary in approach acknowledged the values of the tradition. She formed her first band in Fargo-Moorhead and was soon sharing stages with leading country music performers. Although she sings and plays traditional music, Leigh brings to it a contemporary feel and has helped breathe even fresher life into still vibrant music. Her repertoire extends beyond bluegrass to incorporate elements of country blues, Irish folk song and, since taking up residence in Texas in 2002, western swing. Leigh has declared her admiration for the singing of Melba Montgomery and in her own work demonstrates a similar affection for songs with emotional depths. In this regard, Leigh has steadily extended her composing skills, creating new songs that embrace and traditional values and enhance the genre.