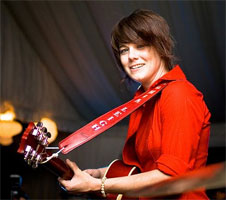 Singer, songwriter, and guitarist Sonia Leigh grew up wanting to be a musician. Her father played in a band and Leigh was constantly picking up and trying to play his instruments even when she was a little girl. She finally received her own guitar at the age of ten and has really never looked back, developing a rich, varied, and soulful writing and singing style that is definitely Southern country and rock but also has strong traces of soul, blues, and folk, as well. Leigh left home at the age of 17 and set out to follow her dreams, taking whatever jobs she could while playing her songs wherever and whenever possible around the Atlanta, Georgia area. Immersed in the town’s rich musical scene, she met Zac Brown of the Zac Brown Band who became, in many ways, a natural mentor for Leigh, and she sang and worked with Brown on various gigs and projects for some seven years before signing with his label, Southern Ground Artists, and releasing her national debut, 1978 December, on the imprint. Prior to that, Leigh had independent releases with Remember Me (1998), Laundry (2000), and Run or Surrender (2007).