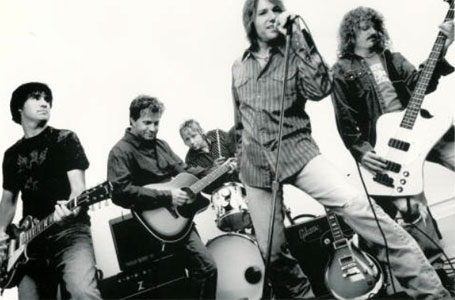 One of the most popular country bands of the early '90s, Little Texas was influenced by modern country outfits like Alabama and Restless Heart, as well as country-rock groups like the Eagles. The band came together in pairs. Porter Howell and Duane Propes started playing together in high school in 1983, and they both moved to Nashville to go to college. Tim Rushlow and Dwayne O'Brien first performed together in Arlington, Texas, in 1984. Rushlow moved to Nashville, and O'Brien followed a couple years later after finishing his degree. Del Gray and Brady Seals had performed together with Josh Logan, and they all came together in November of 1988.
Finally settling on the name Little Texas, the group landed a contract with Warner Bros. in 1989 and toured heavily to help build an audience. Their debut single, "Some Guys Have All the Love," was released in 1991 and quickly hit the Top Ten, as did its follow-up, "First Time for Everything." Finally, the group's debut album, also titled First Time for Everything, was released in 1992. It spawned three further hits in "You and Forever and Me" (their first Top Five single), "What Were You Thinkin'?," and "I'd Rather Miss You." Their 1993 follow-up album, Big Time, was a smash, selling nearly three million copies and spinning off two Top Five country hits in "What Might Have Been" and "God Blessed Texas." The third single, the Seals-sung "My Love," became Little Texas' first number one hit, though all three eventually reached number one on the Nashville Radio and Records chart. Released in 1994, Kick a Little was another platinum success, with two Top Five singles including the title track and "Amy's Back in Austin."
In 1994, Seals departed for a solo career and was replaced by multi-instrumentalist Jeff Huskins, formerly of Clint Black's band; in 1995, the band issued Greatest Hits, which featured the newly recorded Top Five single "Life Goes On." Little Texas took a bit of a break in 1996, only playing about 100 shows that year as opposed to the 300-plus dates they'd been doing for years. They also recorded their third album, Little Texas, during this time, but the years of touring had already taken their toll on the band, and in 1997 they decided to go on hiatus. After several years, the bandmembers reunited and recruited vocalist Steven Troy. The newly reassembled group launched the Hello Again tour in 2004. Three years later, Little Texas released The Very Best of Little Texas: Live and Loud, a new live album containing their greatest-hits, and it was soon followed by the brand-new studio effort Missing Years. The band spent the last few years touring but returned in 2015 with Young for a Long Time.