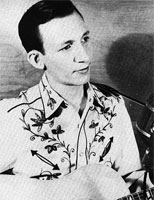 During the 1950s, Jimmie Logsdon was an extremely popular singer and a top country deejay. He was born in Panther, Kentucky to a Methodist minister, and began performing at age 12 in the church choir with his sister Martha Jean. He later played clarinet in his high school band, and also learned to play guitar. He was married in 1940, and entered the Air Force and World War II in 1944, where he sang songs he had written to his comrades. Upon his return, Logsdon opened a record and radio shop in LeGrange, Kentucky and continued to perform professionally. He began his radio career in 1950 on WGN Chicago, and later got his own 15-minute show in Louisville, Kentucky. In 1952, he toured with his friend Hank Williams; following Williams' death, Logsdon honored his friend and mentor with the double-sided single "The Death of Hank Williams/Hank Williams Sings the Blues No More." Logsdon's career was boosted in 1953 when he became the host of the live Country & Music Show on WHAS-TV, which also featured his backup group, the Golden Harvest Boys. Although he released singles and albums through 1962, Logsdon never appeared on the charts. During the '60s, he returned to his career as a deejay and penned songs for such stars as Johnny Horton, Carl Perkins, and even jazz artist Woody Herman. He augmented his income by working in his brother-in-law's swimming pool business, while also making commercials and singing in nightclubs.