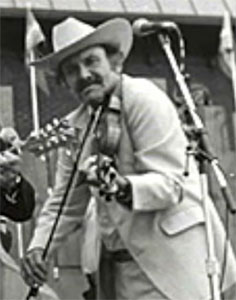 From the kind of activities he is renowned for, most people might get a bit envious of Tex Logan. He is a famous and influential fiddler who hosts annual barbecues in his Madison, NJ, home that attract guests such as Doc Watson, Bill Monroe, and Oscar Brand. Monroe not only attends these events, he also plays music at them, and even did a routine dressed in drag once. Logan has written songs that have been recorded not only by Monroe, but by Emmylou Harris and even Bob Dylan, who normally prefers to write his own songs. Logan is also an electrical engineer who got so far in this field that he is sometimes referred to as a rocket scientist. Which is a bit of exaggeration, but the designation of "rocket scientist and bluegrass fiddler" just sound so perfect.
Born Benjamin Logan Jr., his father was also a violinist, although Logan Jr. quickly realized the vast difference between classical violin training and fiddling once he went from one to the other. He took violin lessons as a child in Texas and from as far back as his adolescent days he was torn between his interest in science and his love of playing the fiddle. Certainly, the latter won out in terms of personal enthusiasm, as he said at one point he would gladly trade 20 years of engineering for one night of fiddling. But in practical career terms, he spent much of his life employed by electrical engineering firms before retiring. He received his bachelor's degree in the subject from Texas Technical College, and went on to be a research assistant at the Massachusetts Institute of Technology. He literally fiddled his way out of this posting, heading for Wheeling, WV, and a stab at full-time musicianship before returning back to the technical world in 1951. During his Wheeling days, Logan was a member of the Coal River Valley Boys which also featured another half and half player, banjoist Don Stover. This meant Stover was spending half his time playing bluegrass, and the other half actually working in the coal mines. The band also featured the well-known Lilly Brothers, as well as Red Belcher on banjo. When Logan returned to M.I.T. in 1951, it was by no means an end to his bluegrass connections. In his second year there, he lined up work for the Lilly Brothers in Boston. Perhaps there was a mental cross-reference between bluegrass and mathematics, considering the rapid pace at which chord changes fly by, especially when the musicians involved try to play the fastest tempos possible, or not possible.
Logan himself would usually mention the speed at which bluegrass was played whenever describing the reasons for liking it in interviews, and the following reaction is typical of comments about Logan from fans of this genre, that is when they aren't drooling over the reputed quality of his barbecue or homemade baked beans: "The most impossibly fast tune I've heard recorded is "Fire on the Mountain" with Tex Logan setting the pace playing with Bill Monroe." This performance is featured on the Smithsonian Folkways collection of live Monroe tracks, entitled Off the Record, Vol. 1, while the comment was taken off an Internet chat room site dedicated to, of all things, bluegrass performances at rapid speeds. Monroe was particularly enthusiastic during the early '50s about banjo and fiddle breakdowns at manic tempos, when Logan was in and out of the mandolinist's Bluegrass Boys. Monroe was one of many artists to have recorded and performed Logan's most famous original song, "Christmas Time's A-Comin'," a real favorite with country artists looking for a seasonal song for that inevitable yuletide theme album. There seems to be a new recording of this number for every generation of country music audiences, from bluegrass grandpappy Monroe to '80s country-rock goddess Emmylou Harris to '90s country radio sharpies Diamond Rio. Dylan, on the other hand, preferred Logan's "Diamond Joe," pulled off as a sardonic folk number on his Good As I've Been to You album.
In 1956, Logan went to work in the communications theory department of the New Jersey Bell Telephone labs. The bluegrass world never let him rest in peace, however, and he was continually pressed back into service by enterprising pickers from the New Jersey area such as flatpicker and vocalist Peter Rowan, with whom he toured Scotland in the '80s, and versatile mandolinist Barry Mitterhoff, who created a revival group in the '90s devoted to Logan's music that performed at the New York City new music venue Tonic. Logan was one of the musicians profiled in Prairie Nights to Neon Lights: The Story of Country Music in West Texas, a collection of biographical essays by Joe Carr and Alan Munde. The jam band generation adopted Logan as one of their own through his connection with big daddy Jerry Garcia, with whom he performed and recorded on several versions of Old & in the Way's new-grass projects. Tex Logan died in Morristown, New Jersey on April 24, 2015 at the age of 87.