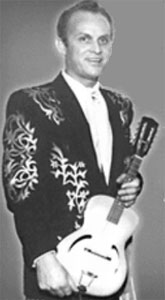 One of the top country musicians of the '40s and '50s, Ira Louvin teamed up with his brother Charlie Louvin to form the Louvin Brothers. The duo's hits included "When I Stop Dreaming," "Cash on the Barrel Head," and "If I Could Only Win Your Love," also recorded by Emmylou Harris. the Louvin Brothers were famous for their ability to sing many styles of music. During their musical career, the two recorded gospel, folk, hillbilly, and '50s pop songs.
Born in the Appalachian Mountains of Alabama, Ira was born Ira Lonnie Loudermilk. Together with his brother Charlie, Ira began his musical career singing gospel songs in church. Despite the family's poverty, the two were encouraged to pursue their musical interests. Ira began playing the mandolin and his brother played the guitar. The two began playing together and eventually brought their sound to the airwaves on a small Chattanooga morning radio show. They were influenced by such recording artists as the Blue Sky Boys, the Delmore Brothers, the Monroe Brothers, and the Callahan Brothers.
When Charlie entered the Army in the early '40s, Ira played with Charlie Monroe. After the Army stint, the brothers moved their career to Knoxville, TN, where they played the radio circuit; first on WROL, then on WNOX. It was in Knoxville that the two changed their last name of Loudermilk to their stage name of Louvin.
In 1951 the Louvin Brothers signed a contract with MGM Records and recorded 12 songs, all of which were only moderate hits. After the contract expired with MGM, the two headed back to Memphis, where they played concerts and radio shows. Capitol Records eventually signed the Louvin Brothers, and they became famous for their gospel standard "The Family Who Prays." Charlie was once again called to the Army to serve in the Korean War, so the group's career again came to a halt. When Charlie returned, the brothers went to Birmingham and sang for the Grand Ol Opry. Labeled as a gospel artist, the Louvin Brothers broadened their style to include pop and hillbilly music. Their song "When I Stop Dreaming" became a Top Ten hit as well as "I Don't Believe You've Met My Baby." In 1956 the two released the albums Tragic Songs of Life and Nearer My God to Thee. The two stayed together until 1963 and produced such favorites as "My Baby's Gone," "Don't Laugh," and "Plenty of Everything but You."
After the breakup, Ira pursued a solo music career, signing with Capitol Records. An alcoholic, Ira was almost killed in an argument with his third wife, Faye. He performed with his fourth wife, Anne Young, until 1965, when he died in a car accident in Williamsburg, MO. Despite the Louvin Brothers' breakup, their influence lived on decades later. Their reputation of versatility and their combination of harmonies influenced rock, gospel, and country musicians, including Gram Parsons, the Byrds, and the Everly Brothers.