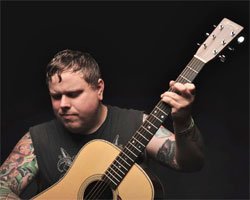 Singer and songwriter Austin Lucas was born and grew up in Bloomington, Monroe County, Indiana, the son of bluegrass producer and songwriter Bob Lucas, who is best known for his work with Alison Krauss. The younger Lucas could harmonize before he could read and spent six years as a vocalist with the Indiana University Children's Choir. Then he discovered punk rock and veered off defiantly in that direction, working as a bassist, guitarist, and/or vocalist for several bands, including Twenty Third Chapter (1997-1999), Rune (he was the group's lead singer from 1998 through 2000), K10 Prospect (as lead singer and guitarist from 2000 to 2004), and the Prague-based Guided Cradle (he became the band's lead guitarist in 2004). Lucas moved to the Czech Republic in 2003, and by the time he returned to the states in 2008, he had re-thought his musical direction, moving toward the Americana-based music and songwriting of his childhood, developing an intelligent and melodic style, and unveiling a country-flavored voice that would make anyone in Nashville proud. He began releasing solo albums beginning with The Common Cold in 2006; it was followed with Putting the Hammer Down in 2007, Bristle Ridge (with Chuck Ragan) in 2008, At War with Freak Folk, also in 2008, Somebody Loves You in 2009, and, after signing with New West Records, Stay Reckless in 2013.