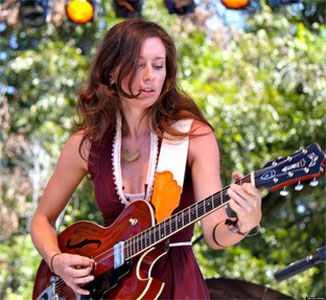 Lera Lynn's big break arrived in 2014, when she was cast as a moody lone troubadour in the second season of HBO's dark crime drama True Detective. Her desolate Lynchian scenes suggested a spare, skeletal singer/songwriter, but Lynn's music is richer than that: she draws equally from classic country and literary Americana, creating an ethereal spell from roots music.
A native of Houston, Texas, Lynn played music as a teenager but decided to major in anthropology when she attended the University of Georgia. Eventually, she was drawn to music, releasing an independent debut called Have You Met Lera Lynn? in 2011. The record received some acclaim -- its song "Bobby, Baby" won the Chris Austin Songwriting Competition at 2011's Merlefest and the record helped her win Best Country Artist at her local Flagpole Music Awards in Athens. Three years later, she released the EP Lying in the Sun, followed by the dreamy full-length The Avenues, which received excellent reviews. This caught the attention of T-Bone Burnett, who was producing the soundtrack for True Detective's second season. Burnett hired Lynn to collaborate with him and Rosanne Cash on songs for the series, a break that helped raise her profile. She capitalized on that attention in 2016 with Resistor, an album that bore a more overt rock influence than its predecessors.