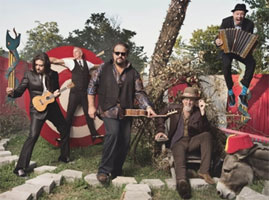 Fusing traditional country with traditional rock & roll, the Mavericks became one of the most critically acclaimed and commercially successful groups of the early '90s. Led by singer/songwriter Raul Malo (born August 7, 1965, Miami, FL), the band was formed in Florida in the late '80s. Malo had previously played in several different bands while he was in high school, as did bassist Robert Reynolds (born Robert Earl Reynolds, April 30, 1962, Kansas City, MO). The pair met at school and discovered they had similar musical tastes — they both enjoyed the music of Roy Orbison, Patsy Cline, Elvis Presley, Hank Williams, and Johnny Cash — and decided to form a band. Reynolds persuaded his best friend, Paul Deakin (born Paul Wylie Deakin, September 2, 1959, Miami, FL) — who had been a drummer in progressive rock bands before and had done some session work — to join the fledgling country band.
Taking the name the Mavericks, the band began playing rock clubs around the Miami area and built up a solid local following. The group chose to play rock clubs because the country bars only wanted to book bands that played covers and the Mavericks preferred to concentrate on original material. In the fall of 1990, the band released an eponymous independent album. The record worked its way onto play lists across Florida and made its way to Nashville, where it gained the attention of nearly every major record label.
In May of 1991, the group went to Nashville to play a showcase gig. Scouts from all of the town's major labels were in attendance, but the band decided to sign with MCA Records. Later that year, the Mavericks set about recording their first major-label album; before the sessions began, they added lead guitarist David Lee Holt, who had previously played with Joe Ely, Rosie Flores, and Carlene Carter. Titled From Hell to Paradise, the record primarily consisted of Malo's original songs and was released in 1992. Although it was critically acclaimed, the album wasn't a commercial success; only a cover of Hank Williams' standard "Hey Good Lookin'" made the charts and that peaked at number 74.
The Mavericks' commercial fortunes turned around with their second major-label album, What a Crying Shame. Produced by Don Cook (Brooks & Dunn, Mark Collie), the album was more streamlined and focused. It became a hit upon its release early in 1994, with the title track becoming a Top 40 hit. Shortly after the release of What a Crying Shame, the group replaced Holt with Nick Kane (born Nicholas James Kane, August 21, 1954, Jerusalem, GA).
Throughout 1994, the band racked up Top 40 hit singles. "O What a Thrill" went to number 18 in the summer, with "There Goes My Heart" reaching number 20 in the fall. By the spring of 1995, What a Crying Shame had gone platinum. During the first half of 1995, the Mavericks recorded their fourth album, Music for All Occasions, which appeared in the fall of the year. Like its predecessor, it was critically acclaimed and a commercial success. By the spring of 1996, the album had gone gold. Trampoline followed in 1998; easily the group's most musically ambitious set to date, Trampoline's blend of pop and Latin textures didn't connect with the mainstream country audience in the United States, though the album (and it's first single, "Dance The Night Away") proved to be a major success in the United Kingdom. The Mavericks soon found themselves at loggerheads with their record company, and they parted ways with MCA. The group went on hiatus for several years, with Malo releasing a solo album in 2001 and recording with the Latino supergroup Los Super Seven, while Robert Reynolds played on sessions with the group Swag. In 2003, the group re-assembled- — with guitarist Eddie Perez replacing Nick Kane — and recorded a self-titled set for Sanctuary Records; a live album and DVD, recorded in Austin, Texas on the album's promotional tour, and released in the fall of 2004. The members went their own way, most of them continuing to perform in various music projects, while Raul Malo continued his successful solo career, recording five more albums.
The Mavericks reunited again in 2011, and expanded their lineup to a quintet with pianist Jerry Dale McFadden, a longtime sideman, bumped up to full membership alongside Malo, Deakin, Perez, and Reynolds. The band signed a deal with Valory Music, an imprint of Big Machine Records, and in early 2012 they charted with the digital EP Suited Up and Ready... and the single "Born to Be Blue." Their seventh full-length studio album, In Time, followed in February 2013 via Valory. The Mavericks toured in support, but fans noticed that Reynolds was playing acoustic guitar during the shows rather than bass, and was barely audible in the mix. In December 2014, the Mavericks made the surprising announcement that Reynolds had been fired from the band after it was discovered he had developed an opiate addiction (the group said they had financed several unsuccessful stays in rehab for him) and was accused of soliciting money from fans under false pretenses. Despite the drama, the Mavericks were determined not to let down their fans, and completed an eclectic new album, Mono, which was released in February 2015. In 2016, the Mavericks asserted their independence by launching their own label, Mono Mundo Recordings, distributed by the successful indie outfit Thirty Tigers. Their first release on the new label was a concert recording, All Night Live, Vol. 1, made during the Mono tour. A studio album, Brand New Day, followed in March 2017. The Mavericks rounded out the year with the release of a holiday single in November 2017, Christmas Time Is ... A full Christmas album, Hey! Merry Christmas!, followed in October 2018. Twelve months later, the Mavericks gave their fans Play the Hits, a collection of covers of rock and country favorites. It found the group interpreting classics made famous by the likes of Bruce Springsteen, Elvis Presley, Waylon Jennings, and Patsy Cline. Given the group's strong Latin musical influences and Raul Malo's Cuban heritage, it seemed a good bet that they would one day record an album in Spanish, and they did just that on 2020's En Español.