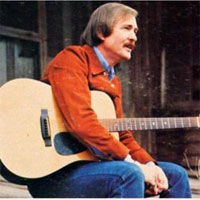 Dale McBride was a grand performer, as much at home on the stage as he was at a backyard barbecue. The "Dale McBride Show" was the whole package: A little Country, a little Rock, spiced with blues, and flavored with pop, and nearly always tendered with a spiritual edge.
His love of guitar was evident in every note he played. And when he was in between all that, he loved to joke and laugh with the audience with monologues that were dry and wry, witty and wild. And just when you thought it couldn't get any better, Dale would mesmerize the crowd by busting loose with his incredible impersonations of Elvis, Walter Brennan, Marty Robbins, Roy Orbison and a host of others.
Dale's small town (Lampasas, Texas) roots, and a deep spiritual upbringing, kept him firmly grounded in a profession that swallows up a lot of talented performers long before they have been in the business for the three solid decades that Dale recorded his legacy. Hundreds of recordings that provide a lasting memory, not only to his proud and loving family and friends, but to countless adoring fans.
Dale's recording history began in the late 50's when traditional Country Music was in a state of flux and very hostile to newcomers. But the innovative Dale was determined to make a living via his talent, and became one of the early pioneers of Rockabilly music. From a memorable performance with Gaylon Christie and the Downbeats on Kobb Records "Because I Love You So",to Dale's solo performances on Fame Records' Rockabilly Classic "Prissy Missy" to his Teardrop Label classic swamp rocker "Barbara". Dale's early hits certainly fired up Biloxi, Mississippi's teen dancers on my Saturday afternoon WLOX-TV dance program, "Teen Time".
Still, Dale's heart never drifted far from his country roots, and the flip sides of his rockabilly recordings generally featured a pure traditional country love song, i.e., "Born To Love You" and "I Can't Ever Free My Mind".
With that rare crooning tenor voice that covered more than a couple of octaves, and a falsetto that could raise the hair on the back of your neck, Dale could have gone in any musical direction, perhaps even Opera, a fact that did not escape Dean Martin's attention in the mid sixties when he heard Dale and immediately signed him to a contract with his label Reprise Records.
Although Reprise was a huge and successful major record subsidiary, its focus was on adult pop, mostly middle-of-the-road music, which Dale was great at, but he yearned for a more mass appeal sound, and something more attuned to his roots. By 1970 Dale found a progressive Texas label, Thunderbird Records, which was eager to give him a shot at some traditional country cover songs, along with some of his own original compositions, including "Corpus Christie Wind". And that was Dale's first single to hit Billboard Magazine's Hot Country Chart.
During the early to mid 70's Dale produced a couple of albums on his own label which included a "Live" album of one of his stage shows, and also some of his wry monologues, plus some great impressions of Elvis Presley and Walter Brennan.
It was around that time that Nashville started perking up to Dale's music, and noted arranger/ producer Bill Walker signed him to a new energetic label called Con-Brio Records where he recorded two successful albums along with several hit singles, including his biggest career chart song, "Ordinary Man".
Other charted singles included, “I Don’t Like Cheatin’ Songs”, “Getting Over You Again”, and “Always Lovin’ Her Man”.
It was also during that time that several of his own compositions received national attention through inclusion on these albums – My Girl, Get Your Hands On Me Baby, and Love I Need You, all received critical praise from fans and music critics alike.
Producer and arranger Bill Walker described Dale at the time as, “Versatile, talented and one of the great voices in country music”.
Dale recorded for Con Brio for the period 1976-1979.
During the 80’s Dale continues an exhaustive touring schedule and focused his attention and recording more spiritual force. Louisiana’s former governor Jimmy Davis was enthralled by Dale’s highly charged spiritual rendition of Davis’ famous “You Are My Sunshine” and inspired him to record “Let It Shine, Let It Shine” another positive classic. Thought his musical outreach he continued to build a positive base for himself among fans and music lovers alike.
And when it looked like the sun would never stop shining on Dale McBride, the 1990s crept in under a dark cloud that came with the devastating news of his father's death, and only a short time later Dale learned that he, himself, was had a terminal brain tumor.
He passed away in 1992 leaving a legacy of great music, great performances and great memories for his many friends and fans – gone, but not forgotten Dale’s memory continues to live on through his music.