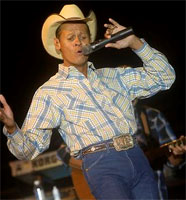 Neal McCoy's brand of neo-traditionalist honky tonk brought him a string of hits in the mid-'90s. McCoy was born Hubert Neal McGaughey, Jr. in Jacksonville, TX, to a father of Irish descent and a Filipino mother. He grew up listening to all kinds of music — country, swing, rock, disco, R&B — and first sang in local gospel choirs. His voice developed into a rich baritone, and he first put it to professional use in an R&B band; soon, however, he returned to country music, playing bars and clubs all over Texas. In 1981, he won a talent contest that was attended by Janie Fricke, and she helped him land a slot on tour as Charley Pride's opening act. He spent six years in that capacity, and finally left to pursue his own recording career in 1988, when he released his debut single, "That's How Much I Love You," under the name Neal McGoy (the pronunciation of his birth name). Modifying it to the more common McCoy, he released his debut album, At This Moment, on Atlantic in 1990. Despite McCoy's growing reputation for exciting, freewheeling live shows, neither it nor the follow-up, 1992's Where Forever Begins, sold all that well.
However, McCoy's fortunes took a turn for the better with his third album, 1994's No Doubt About It. Both the title track and "Wink" topped the country charts, and "The City Put the Country Back in Me" went Top Five, helping No Doubt About It sell over a million copies. Suddenly a breakout star, McCoy returned in 1995 with You Gotta Love That, another platinum seller that produced a total of three number three singles: "For a Change," "They're Playin' Our Song," and the title track. 1996's Neal McCoy kept his hit streak going strong, giving him a third straight platinum album and another Top Five single in "Then You Can Say Goodbye." The following year saw the release of a Greatest Hits compilation, and McCoy offered a new album later in 1997 called Be Good At It. Despite another Top Five smash in "The Shake," album sales dipped below the million mark for the first time since McCoy's breakthrough. 1999's The Life of the Party, contrary to its title, was an album of ballads and soft country-pop tunes, and both it and 2000's 24-7-365 found McCoy's sales progressively slipping. Taking some time off to recharge, McCoy returned in early 2003 with The Luckiest Man in the World, following it with That's Life in 2005. Music of Your Life, a kind of big-band jazz and country amalgram with Les Brown, Jr. and recorded for a public television special, appeared in 2011, with a new studio album, XII, finally arriving in 2012. McCoy quickly returned in 2013 with Pride, a tribute to his hero Charley Pride.