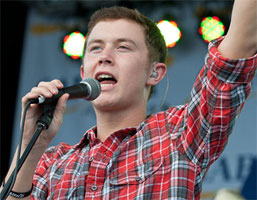 The winner of American Idol’s tenth season, country crooner Scotty McCreery began singing as a child in Garner, North Carolina. School performances eventually gave way to local competitions, and McCreery won a singing contest in the nearby town of Clayton before trying out for American Idol as a 16-year-old. Auditioning with Josh Turner’s “Your Man,” he made good use of his country twang and deep baritone Vocals, prompting the judges to compare him to Randy Travis. McCreery passed the audition, became an audience favorite, and eventually won the competition in May 2011. Lauren Alaina, another country-singing teenager and a close friend of McCreery’s, took home the second-place title.
McCreery's coronation song was "I Love You This Big," a country ballad that sold nearly 175,000 copies during its first week of release. The song also cracked the country charts at number 32, making it the highest-charting debut single in country history, and helped stir up anticipation for his full-length album, which he recorded while preparing for American Idol’s summer tour. Clear as Day appeared in the fall of 2011 from Mercury Nashville, debuting at number one on the Billboard Top 200 the week of its release. It went on to be one of the better-selling latter-day Idol-related records, earning a platinum certification and producing another hit single in "The Trouble with Girls." The following year, McCreery released the seasonal Christmas with Scotty McCreery in time for the 2012 holiday season.
In October 2013, he returned with his second official studio album, See You Tonight. Produced by veteran producer Frank Rogers, the album moved McCreery into bright contemporary country-pop. It was a commercial and critical success, debuting at number one on Billboard's Country Albums chart and earning widespread acclaim, including McCreery's win of the Breakthrough Artist Award at the 2013 American Country Awards. In 2015 he issued a new single, "Southern Belle," and toured with Rascal Flatts. The year 2017 saw the release of the poignant "Five More Minutes," the first single from his third LP, Seasons Change. A trio of additional singles arrived in early 2018 in advance of Seasons Change, which was released by Triple Tigers/Sony Music in March of that year.