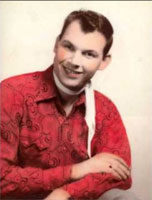 Eugene Edward McKown, was born on July 16, 1932 in Liberty, MO and passed away May 18, 2011 at his home in Osceola, MO. Gene was a veteran of the United States Navy and served aboard the USS Essex in the early fifties. After his discharge from the Navy, Gene began a career in music that would carry him throughout the remainder of his life. His first singles were cut for the Aggie label out of California in 1958. After 1964, Gene played the Kansas City area for the next 25 years. Gene's main venue during that time was The Starlite Club in Riverside. He moved on to Howard's Bar in Gladstone in late 70's until 1988 before moving to Osceola, MO. Gene was a well known and respected song writer and recording artist in the music industry. One of his compositions “Rockabilly Rhythm” was recognized by the Rock and Roll Hall of Fame.