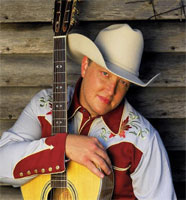 A resident of Nashville since the age of three, Ken Mellons found a Music City contract with Epic in 1994, after several appearances on the Grand Ole Opry spread the word about his talents. Born in Kingsport, TN, on July 10, 1965, Mellons soon moved with his family to Nashville, where he grew up on the standard honky tonk heroes: Merle Haggard, George Jones, and Lefty Frizzell. He played guitar and sang at school talent shows, and moved on to the clubs after high-school graduation. Impressed by one performance, the general manager of the Grand Ole Opry invited Mellons to make a guest appearance. He was invited back several times -- in fact, his Opry residence lasted from 1989 to 1992. While most kids his age were studying in college, Mellons was honing his craft alongside future country stars like Chely Wright and Lonestar's Dean Sams.
After slugging it out on the Opry's Country Music USA show, Mellons caught the attention of impresarios Hal Durham and Bud Wendall, who bumped him up to a Friday night spot at the Opry. Producer Jerry Cupit took notice, and a deal with Epic was proffered in 1993. Mellons' self-titled debut album was released one year later; the single "Jukebox Junkie" was a hit and continued to receive airplay for the rest of the decade. Mellons followed up his debut's success in 1995 with Where Forever Begins. He was married that same year and also moved from EMI to Curb, where he issued the confusingly titled Best of Ken Mellons in 2001. The record was actually made up of all new material, but for a "dance remix" of "Jukebox Junkie." In early 2003, Mellons issued the successful single "Mr. DJ," but parted ways with his Curb before an album could be released. Mellons wasn't in label limbo for long though. In 2004 he released Sweet on the Home label, which featured the single "Paint Me a Birmingham."