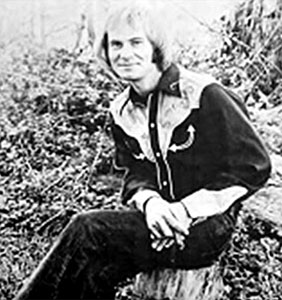 Best known for writing the country landmark "Behind Closed Doors," Kenny O'Dell also enjoyed some success on the pop charts as a solo performer. Born Kenny Gist, Jr. in Antlers, OK, in 1946, he was raised in Santa Maria, CA, scoring his first regional hit in 1963 with "Old Time Love." After a stint with the band Guys & Dolls, O'Dell in 1967 signed as a solo act to the White Whale label's Vegas subsidiary, releasing his debut LP, Beautiful People; the title cut was a Top 40 hit, although its chart momentum was curtailed by a copycat version recorded by the better-known Bobby Vee. The follow-up single, "Springfield Plane," cracked the Hot 100, and in 1968 O'Dell's composition "Next Plane to London" found its way to folk-rockers the Rose Garden via Pat Pipolo, his cousin and the group's co-producer. The result was a Top 20 hit, and O'Dell also contributed the Rose Garden's second single, "If My World Falls Through." After Vegas folded, he moved to White Whale for several little-noticed singles, including "No Obligations" and "Groovy Relationship." With the label's demise imminent, in 1970 O'Dell relocated to Nashville to head Bobby Goldsboro's publishing firm House of Gold. After authoring a handful of minor hits including Sandy Posey's "Why Don't We Go Somewhere and Love?," O'Dell scored his commercial breakthrough with "I Take It on Home," a Top Ten country hit for Charlie Rich in 1972. The following year, Rich cut his superlative "Behind Closed Doors," which not only topped the country charts during its 40-week run but also cracked the pop Top 20 on its way to winning the Grammy for Best Country Song. The attendant publicity earned O'Dell a solo deal with Capricorn, highlighted by the 1975 Top 40 hit "My Honky Tonk Ways" and 1978's Top Ten entry "Let's Shake Hands and Come Out Lovin'." Also in 1975, he and Larry Henley collaborated on Tanya Tucker's chart-topping "Lizzie and the Rain Man"; O'Dell was a Grammy nominee again in 1986 for the Judds' smash "Mama He's Crazy." A decade later, he was inducted into the Nashville Songwriters Hall of Fame.