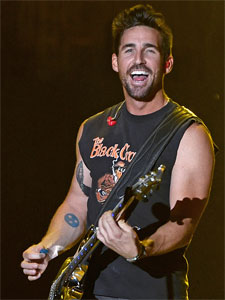 When plans for a professional golfing career were derailed by an injury, country songwriter Jake Owen picked up a guitar and never looked back. A native of Vero Beach, Florida, Owen and his fraternal twin Jarrod grew up in the Florida sun playing sports like baseball and football before Jake turned to golf and Jarrod to tennis. They continued their respective sports together as students at Florida State University, until a water-skiing accident resulted in reconstructive surgery for Jake. Off the golf team and struggling with depression, he borrowed a neighbor's guitar and passed the time teaching himself to play by listening to childhood favorites like Waylon Jennings, Merle Haggard, Vern Gosdin, and Keith Whitley.
Ambitious but inexperienced, with good looks and a smooth baritone, Owen was soon to be found playing country covers in campus bars for free beer and a few bucks. Growing tired of covers, he began penning his own songs, which were met with a positive response. This motivated him even more to follow his new dream of becoming a singer, eventually causing him to skip out on his remaining college classes -- only nine credit hours remained on his English and political science degree -- and head to Nashville. He constantly wrote songs in his Bellevue apartment, and a chance lunch meeting found producer Jimmy Ritchey (Clay Walker, Mark Chesnutt) befriending the young musician. For over a year, the two wrote songs together, including a track called "Ghost" (also co-written by Chuck Jones) that Kenny Chesney almost wound up recording -- the track would later be included on Owen's own album.
Eventually, his friendship with Ritchey led to a meeting with Sony/BMG Nashville and resulted in a record contract for the determined 24-year-old, who already had his album basically finished. His debut, Startin' with Me, appeared in summer 2006 on RCA, spearheaded by the single "Yee Haw." As the song climbed higher in the charts, Owen supported the record on the road by opening for Kenny Chesney. In 2007, the title track ballad became the album's second single, reaching number six and spending a whopping 35-plus weeks on the Billboard country chart. "Don't Think I Can't Love You" appeared in the summer of 2008, heralding the release of his second full-length, Easy Does It, in February of 2009. Easy Does It spawned a number two hit in "Don't Think I Can't Love You," and "Eight Second Ride" peaked at number 11 in early 2010.
He delivered his third album, Barefoot Blue Jean Night, in the summer of 2011. Barefoot Blue Jean Night was his biggest hit to date, launching number one country singles in its title track and "Alone with You." As the summer of 2012 wound to its end, he released the Endless Summer EP; the collection of four new songs came out that September. Owen returned in December of 2013 with his fourth studio album, the Joey Moi-produced Days of Gold; it was preceded by its title track lead single, which only reached 19 on the charts. The album's next single, "Beachin'," did much better, reaching number one on Billboard's country chart and earning a platinum certification; "What We Ain't Got" closed out the album's cycle by making it to 19.
Owen started to unveil new material in the summer of 2015 with "Real Life," a single that went to 17 on Billboard. This single didn't appear on Owen's fifth full-length album but his next single, "American Country Love Song," came out in early 2016 and provided the anchor for American Love, which arrived in July of that year. Two further singles -- "If He Ain't Gonna Love You" and "Good Company," which both reached the lower rungs of Billboard's Country Airplay Top 40 -- followed before the album's cycle closed. In November 2017, Owen's first five albums were sampled on Greatest Hits, which also featured two new songs.