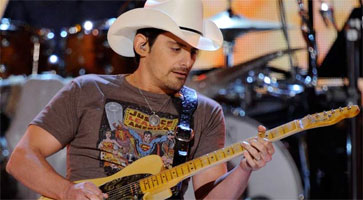 Contemporary country singer/songwriter Brad Paisley was born October 28, 1972, in Glen Dale, WV; given his first guitar at age eight, he delivered his first public performance at church two years later. With his 50-something guitar teacher Clarence "Hank" Goddard and two of the older man's seasoned musician buddies, the teenaged Paisley formed his first band, the C-Notes, and at age 12 began writing his own material. After performing in front of the local Rotary Club, he was invited to appear on Wheeling station WWVA's famed Saturday night broadcast Jamboree USA. Paisley's debut was so well received that he was invited to join the program full-time, and in the years to follow he opened for the likes of the Judds, Roy Clark, and Little Jimmy Dickens. He later attended Nashville's Belmont University, serving an internship with ASCAP; the contacts Paisley made there helped him land a songwriting deal with EMI, and he also appeared on countless demos. Signing to Arista, he issued his debut solo album, Who Needs Pictures, in 1999. The record produced two chart-topping singles in "He Didn't Have to Be," an ode to loving stepfathers, and "We Danced" and also earned generally positive reviews for its diversity of country styles. In the meantime, Paisley recorded a duo with Chely Wright, "Hard to Be a Husband, Hard to Be a Wife," for the Backstage at the Grand Ole Opry compilation; the two later collaborated on several songs for Wright's Never Love You Enough album. The sequel to Paisley's debut, Part II, was released in 2001 and promptly returned him to the Top Five with "Two People Fell in Love." "I'm Gonna Miss Her (The Fishin' Song)" gave Paisley his third chart-topper, and "Wrapped Around" fell one spot short of becoming his fourth. "I Wish You'd Stay" became the fourth Top Ten hit from the record in early 2003. At the beginning of August 2005, Paisley put together a short "director's commentary" preview of his next album for his fan base to download. The full album, Time Well Wasted, appeared two weeks later and narrowly missed the top of the album charts, though it did hit number one on the country charts. In 2006 Brad Paisley Christmas, a collection of both originals and covers, came out, followed by 5th Gear in 2007, which included the ubiquitous "Ticks," a sure future novelty classic. An album of mostly guitar instrumentals (Paisley's excellent guitar playing is a big part of his appeal), Play, followed in 2008, with the big country Vocals hit "Waitin' on a Woman" added in as a "bonus" track. By now poised at the very top of the commercial country world, Paisley released American Saturday Night in 2009. American Saturday Night was greeted by Paisley's strongest reviews yet and generated the hit singles "Then," "Welcome to the Future," and "Water." Paisley bought some time with the 2010 release Hits Alive -- a double-disc package divided into one live set and one collection of hits -- and then returned with his seventh collection of new songs, This Is Country Music, in May 2011. "Old Alabama," the second single pulled from This Is Country Music, became Paisley's 19th number one single, followed quickly by his 20th number one, the Carrie Underwood duet "Remind Me," but there were signs of a chart slowdown when "Camouflage" became his first single in 11 years to not reach the Top Ten (it topped out at 15); similarly, This Is Country Music and American Saturday Night both stalled at gold where their predecessors had gone platinum.
As he toured This Is Country Music, Paisley also busied himself in a variety of show biz cameos, including popping up on the Cars 2 soundtrack and guesting on South Park. He also published a music-focused memoir called Diary of a Player, which was co-written by music journalist David Wild. After the tour came to a conclusion, he set out to work on his ninth album, Wheelhouse. An ambitious, genre-hopping album, the record was preceded by the "Southern Comfort Zone" single in the fall of 2012 and "Beat This Summer," which appeared a month prior to Wheelhouse's April 2013 release. Wheelhouse debuted well -- once again, he took the number one slot on Billboard's Country Albums chart and number two on the Top 200 -- but it soon got swallowed up in a media controversy concerning its album track "Accidental Racist." A duet with rapper LL Cool J, the song attempted to tackle the lasting legacy of racism but earned attention for its clumsy lyrics from Paisley and LL Cool J. Paisley conducted interviews that eloquently explained the intentions behind the song but the damage had been done: his next single, "I Can't Change the World," barely cracked the U.S. Country Top 40 and its successor, "The Mona Lisa," did marginally better, peaking at 24, while the album itself failed to go gold.
Within a year of the release of Wheelhouse, Paisley was back with a new single, "River Bank," which hit number 12 on the country chart. Its accompanying album, Moonshine in the Trunk, was solidly a country record, and featured duets with Carrie Underwood and Emmylou Harris. It became his eighth straight album to top the country chart, and reached number two on the pop chart. The album's second single, "Perfect Storm," made it to four, but the subsequent "Crushin' It" and "Country Nation" didn't crack the country Top Ten. In the summer of 2016, Paisley returned with "Without a Fight," a duet with Demi Lovato that was intended as a teaser for his 11th album. When Love and War appeared in April 2017, preceded by the Top Ten single "Today," "Without a Fight" wasn't on the record but duets with Mick Jagger and John Fogerty were.